PRT makes both multi-rotor and fixed-wing UAS, which it markets for use in commercial, military and law-enforcement applications. Its XV fixed-wing VTOL system, capable of beyond visual line-of-sight operations, was launched in February and has been sold to customers in the oil and gas sector. The X1 multi-rotor system is available with payloads that include ground-penetrating radar and X-ray sensors, and an IED de-arming system. The company highlights the exportability of its systems and says its designs are predicated on “wherever possible sourcing from USA/NATO partners“.

“We chose to partner with Sky Power because of their country of origin, ISO 9001 certification and [the fact] that their engines can be customized and configured for specific applications, either as a direct propulsion unit, as a range extender in a hybrid configuration, or as a power unit and generator“, said Carl Cagliarini, PRT’s Chief Strategy Officer. “The flexibility ethos of Sky Power is in synchronicity with that of PRT. Having information on exact metrics, such as fuel consumption, engine parameters, and exhaust-gas temperatures optimization means that performance and environmental statistics can be accurately measured and presented for safety based routine service.” 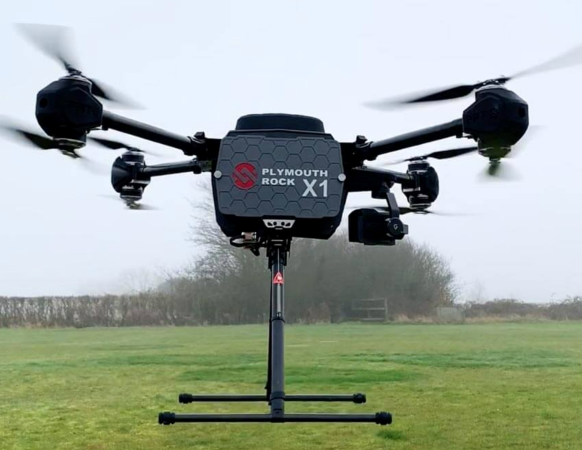 The X1 is marketed to a broad range of military, law-enforcement and border patrol customers. (Photo: Plymouth Rock Technologies)