Potential Use as First Strike Asset

The strategic arm of China’s military, the People’s Liberation Army Rocket Force (PLARF), has tested a new variant of the DF-15 short-range ballistic missile (SRBM), providing an insight into the Chinese way of war.

The test launch was reported by state-affiliated outlet The Global Times on 21 August. It stated that two missiles with a new warhead were launched against mock targets “hundreds of kilometers away,” and optimistically proclaimed the missiles could “paralyse entire hostile systems by pinpointing key hostile facilities.”

The videos, released on 23 August by China Central Television 7 (CCTV7), show the launch, with the attendant caption indicating the missiles included a new type of guidance and were fired in contested electromagnetic conditions.

The reported launch is likely an attempt to improve the PLA’s ability to fight and disable an opponent’s operational system. The reference to “paralysing hostile systems” is indicative enough.

Jeffrey Engstrom’s report Systems Destruction and Systems Confrontation Warfare, published by RAND in 2018, discusses at length the Chinese view of military operations. He explains that, to the Chinese military, every armed force is an operational system, within which there are certain key nodes. Once those nodes are paralysed, or destroyed, the system will either cease to function, or will function less efficiently. For example, destruction of a C2 bunker or communications hub might exert a disproportionate effect on an enemy force, when compared to the simple destruction of an armoured battalion.

The exercise is also informative: two missiles were launched in a rapid-reaction exercise against well-protected targets. This suggests that, if Beijing perceived a political crisis to be escaping its control, the DF-15 could, perhaps, form part of the first wave of strikes against critical targets, securing an early advantage. The emphasis was also on speed and the exploitation of road networks to get the missiles into an appropriate position for the launch.

This correlates with a June article published by Global Times on the DF-26 anti-ship ballistic missile. In those drills, the missiles were launched in waves, before relocation to launch additional waves, all at night and using roads. It follows that key elements of the PLARF’s rapid response to a conflict lie in the exploitation of road networks, manipulation of temporal advantage, and maximising survivability through night launches. 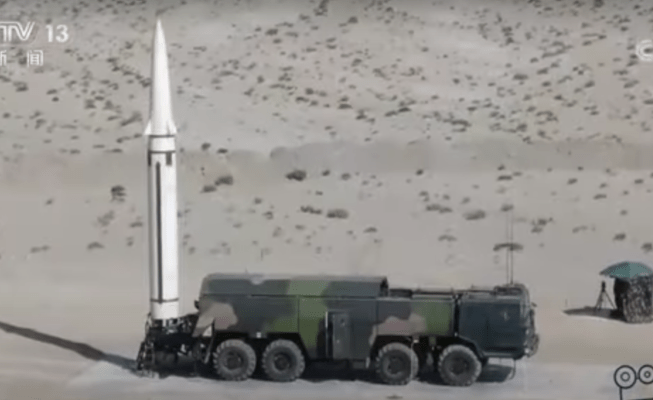