Video footage released by state broadcaster China Central Television (CCTV) on 4 January shows the 8×8 unmanned vehicle disembarking from a landing craft alongside several dismounted troops as part of what appeared to be an amphibious landing exercise.The footage first shows the logistical support UGV, which appears to be the ‘Dragon & Horse II’ from China’s Sunward Intelligent Equipment Group, being loaded with munition crates, then being used to transport these during the exercise.

The ‘Dragon & Horse II’ was first unveiled during the 2018 Airshow China defence exhibition in Zhuhai. More recently, unconfirmed Chinese media reports have claimed that a tracked variant of has also been developed. This version would be expected to have improved mobility compared to the wheeled version.

The all-terrain UGV shown in the CCTV footage features two fixed axles in its mid-section, as well as one axle each at the rear and the front that can be elevated independently to boost mobility, depending on the terrain. No further details were provided, including whether the platform has already formally entered PLA service.

In recent years, China has been investing heavily in R&D in unmanned platforms, resulting in the Chinese military rapidly expanding the number of these systems in its inventory.

Meanwhile, CCTV also reported that the PLA’s Joint Logistic Support Force has begun operating a high-energy laser designed to destroy older, unused ordnance. According to the media outlet, the laser can destroy the munitions from a distance of 50 metres. 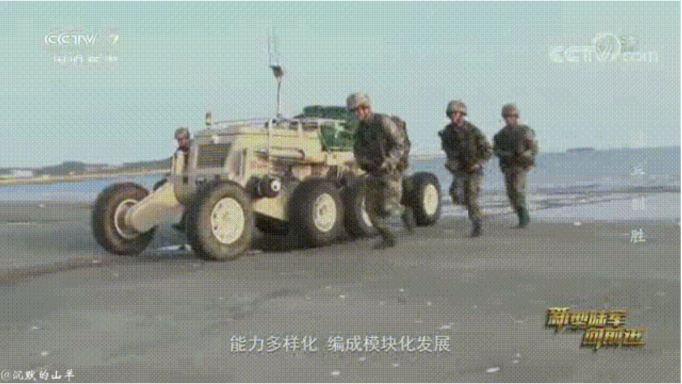 The Dragon & Horse II shown in an amphibious landing scenario. (Images via CCTV)