Delivery of the self-propelled systems, for use by the Philippine Army (PA) and Marine Corps (PMC), is currently being organised by Manila, said Army Spokesperson Col Xerxes Trinidad.

Speaking to the state-owned Philippine News Agency (PNA), the colonel said that bidding for the transport of the 130mm MRLs – along with related equipment and munitions – is now ongoing at the Department of National Defense (DND). Once delivered, these systems will be under the command of the Army Artillery Regiment.

Seoul’s intention to deliver these systems was first announced in 2019. Neither the PA nor the PMC currently operate MRLs.

Developed in South Korea, the K136 is based on a KM809A1 6×6 military truck chassis, powered by a diesel engine developing 236 hp. Equipped with 36 launch tubes, the MRL launches two types of rockets: the standard K30 (with a maximum range of 23km); and the extended range K33, with a 36km range.

The South Korean army, which began operating this MRL in the 1980s, is currently replacing the K136 with the more advanced K239 Chunmoo which, among other things, is capable of firing both guided and unguided rockets.

Meanwhile, Philippine media reported that the Philippine Navy (PN) is keen on acquiring a second decommissioned Pohang-class corvette from South Korea, after receiving ex-ROKS Chungju, christened BRP Conrado Yap in PN service. Navy representatives have examined the decommissioned ROKS Andong at the Jinhae naval base in South Korea, which was found to be in “good operating condition.”

In September 2020, Philippine Defense Secretary Delfin Lorenzana revealed that the service would like to operate three Pohang-class corvettes. 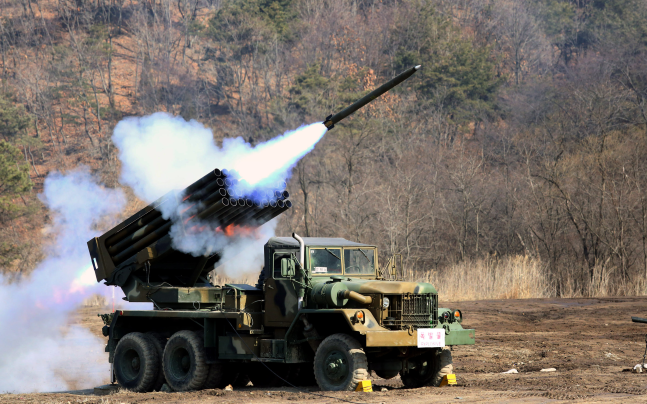