The Philippine Army (PA) announced on 10 April it has received the first two of four Vehicle Mounted Mine Detectors (VMMDs) ordered from the UK last April.

Based on the Armtrac Ltd 100-350 Mk.2, the up-armoured and modified tractors will be deployed with the PA’s 525th Engineer Combat Battalion to conduct mine detection and clearing operations. The remaining two VMMDs are slated for delivery in July 2023. The new assets were procured through a government-to-government agreement as part of the Horizon Two phase (2018-22) of the Revised Armed Forces of the Philippines Modernization Program (RAFPMP).

According to the manufacturer, each VMMD can accommodate two operators in the armoured cabin. They operate a vegetation cutter on the rear robotic arm to clear high vegetation on roadsides, and a detector on the front robotic arm to detect IEDs, with a paint marker to indicate the position. A small excavator bucket, fitted in place of the vegetation cutter, allows excavation of earth for exposure of buried explosive ordnance. 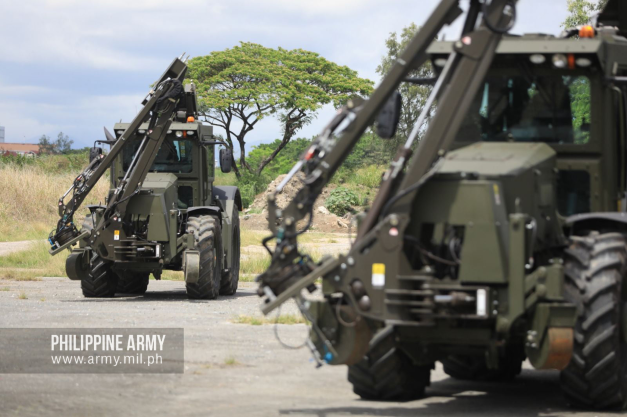 Two of the four VMMDs on order have so far been delivered. (Philippine Army)