Initial Funds for Mi-17 Acquisition to be Released Soon

The secretary said Manila plans to procure the aircraft from PZL Mielec – a Lockheed Martin company in Poland – while the OPVs are expected to be acquired from Australian shipbuilder Austal. No contract has yet been signed with either company, with Lorenzana clarifying that negotiations are still ongoing.

The announcement, which highlights Manila’s ongoing efforts to modernise the country’s armed forces, comes after the PAF disclosed on 9 November it had received the final five of the 16 S-70is ordered in 2019 under a $241 million contract. Operated by the PAF’s 205th Tactical Helicopter Wing, these initial helicopters were acquired from PZL Mielec to meet the service’s ‘combat utility helicopter’ (CUH) requirement under the ‘Horizon Two’ phase (2018-22) of the Revised Armed Forces of the Philippines Modernization Program (RAFPMP). However, one of the aircraft was lost in a 23 June crash that resulted in the death of all six personnel on board.

With the planned procurement of an additional 32 S-70is, the PAF is aiming to fully replace its ageing fleet of Bell UH-1 HUEY-series helicopters.

Meanwhile, Lorenzana was quoted by state-owned Philippine News Agency (PNA) as saying on 8 December that funds for the “down payment” of Mil Mi-17 rotorcraft – set to be acquired from Russia – would be released “soon,” to meet a long-standing PAF requirement for heavy-lift helicopters.

Referring to the future OPVs, the defence secretary said he hopes a contract with Austal, which has a shipyard in Balamban, Cebu Province, can be signed before the end of President Rodrigo Duterte’s term in mid-2022. 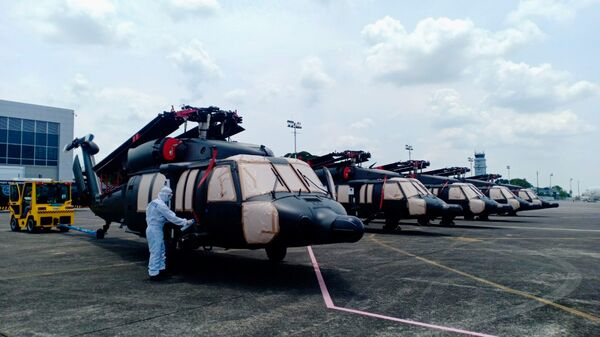 Five BLACVK HAWKs delivered to the PAF in June as part of an initial order for 16 placed by Manila in 2019. (Photo via author)