ASFAT Said to be Offering OPV Design for Outstanding Requirement

The Philippine Navy (PN) is considering possible collaboration with Turkey to meet current and future modernisation requirements, particularly as it renews efforts to acquire six OPVs after ditching plans to procure them from Austal.

The service’s chief, Vice Adm Giovanni Carlo Bacordo, told the Philippine News Agency (PNA) on 21 April that a PN delegation recently visited Turkey to “explore methods of collaboration with the Turkish government,” adding that the trip took place at the invitation of defence contractor ASFAT, which is directly under Turkey’s Ministry of National Defense.

Referring to ASFAT, which develops, manages, and uses the facilities and capabilities of the 27 ordnance factories and three public naval shipyards in Turkey, Bacordo stated, according to the PNA, that it is particularly interested in providing “capability and technology solutions and being able to participate in the different acquisition projects for naval vessels and other defence equipment […] Their main selling point is their centuries-old and proven shipyard capability that guarantees the quality of work and long-term integrated logistics support.”

One solution proposed by ASFAT is a new ship design to meet the PN’s ongoing OPV requirement. Austal was believed to be the frontrunner in this project, but Philippine Defence Secretary, Delfin Lorenzana, revealed in early April that Manila was now seeking new proposals, following differences with Austal over price increases.

A video showing the OPV design proposed by ASFAT was presented at the ADAS exhibition in Manila last month. According to the company, the 86m OPV would have a draught of 3.6m, a full-load displacement of 2,000t, a top speed of 23kt and a maximum range of 6,000nmi at 15 knots.

The anti-air and anti-surface-warfare-capable ships would be used for coastal defence and maritime operations up to the EEZ. Each would be armed with two .50-cal heavy machineguns, two stabilised 30mm guns, and a 76mm main gun, embarking one 10t helicopter and up to two USVs. ASFAT would build most of the OPVs locally and improve the capability of the naval shipyard in Cavite through technology transfer.

Meanwhile, South Korean shipbuilder Hyundai Heavy Industries (HHI), which has provided the PN with two Jose Rizal-class frigates and has been contracted to supply two 3,100t corvettes, is believed also to be proposing an OPV, based on its HDP-1500 Neo design. An export variant of a design developed for the Republic of Korea Navy (RoKN), the proposed 81m vessel would have a draught of 3.5m, a maximum speed of 21kt and a displacement of 1,700 tons. It would also feature a helipad and be capable of conducting multiple operations, depending on the mission module, including patrol and coastal protection, anti-surface warfare and humanitarian assistance and disaster relief.

A contract for the PN’s OPV programme was expected to have been signed during the administration of President Rodrigo Duterte, but Lorenzana recently clarified that the project will be passed on to next administration, following the upcoming 9 May presidential election.

Meanwhile, the PN chief was quoted as saying that successful engagement with the Turkish Navy will be perceived as a “significant opportunity that would jumpstart future co-operation” in maritime security through naval exercises, personnel exchanges, and education and training, inter alia. 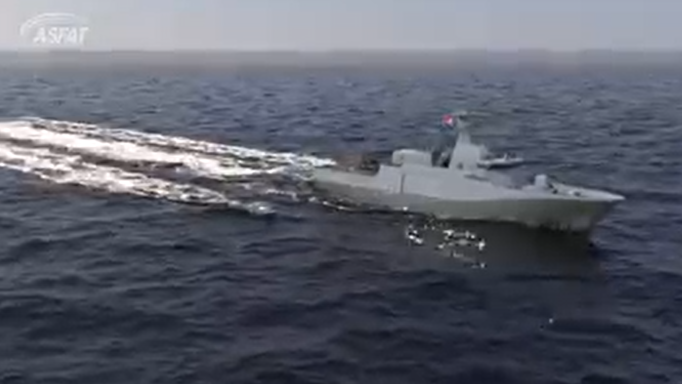 A somewhat poor quality screengrab from the ASFAT promotional video shown at ADAS in April. (ASFAT)