Patria’s new C-UAS solution – an effector pod deployable against a wide range of UAS – is premiering at Eurosatory 2022.

The smallest version can be fired from the hand. The effector initially works like a rocket, spreading a kind of cloud or mist of material strips at the highest point of flight. These create curtain, into which the drone then flies. The strips wrap around the engine or are sucked into it, destroying it – and the drone crashes. In the case of dense swarms of drones, this method can also be used against several units simultaneously. The curtain made of highly stable threads – Patria did not want to divulge any details about the material – is light and also falls to the ground after a while, without risking injury.

The solution is available in several versions, the one shown using a 55mm case and designed to be hand fired – but a 76mm version is also envisioned for launch from vehicle-mounted dispensers. Depending on the calibre, the size of the cloud can also be adjusted.

This C-UAS has been under development since 2017, and is now being presented to the public for the first time after extensive testing. It is intended to be a cost-effective C-AUS solution with a kinetic effect. 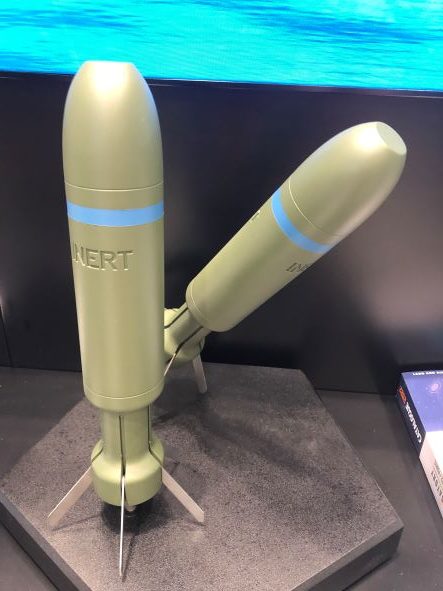 Various launch configurations are envisioned for the system. (André Forkert)