FNSS has been conducting R&D studies in the field of 8×8 tactical wheeled ACVs for many years, assessing their output in 2005 and becoming the first company in Turkey to reveal its product family. The OTTER Amphibious Wet-Gap Crossing System, which is the first original design and serial production project contracted in Turkey’s military land vehicles sector, signed in 2007, was developed through PARS 8×8 technology.

Before delivery was made to the Turkish Land Forces (TLF), FNSS successfully exported 6×6 and 8×8 PARS vehicles, in various configurations, to both Malaysia and Oman. With the Oman project, the PARS III 6×6 became the first FNSS 6×6 wheeled ACV to enter an army inventory. Today, with both the PARS IV and PARS SCOUT programmes, FNSS has become the sole supplier to the Turkish Armed Forces for 6×6 and 8×8 vehicles.

The PARS III 6×6
The PARS III 6X6 was developed with a particular emphasis on mobility, protection, payload, and growth potential. It features cutting-edge technologies, resulting in performance and durability that answer to the operational requirements of modern armies.

Its combat weight is 25,000kg and the vehicle is powered by a water-cooled diesel engine, coupled to a fully automatic transmission that allows a maximum road speed up to 100 km/h. Capable of manoeuvring on a 60% vertical and a 30% side slope, climbing 0.7m-high obstacles and crossing 1.75m-wide trenches, PARS III 6×6’s unique design features a powerpack location and optimal weight balance that results in an almost equal load on each axle.

This design approach enables comfortable movement, even on loose and soft terrain, providing maximum control at high speeds, as well as short braking distances. The vehicle has 6×6 driving characteristics, with all axles locking when necessary. The central tyre inflation system allows the driver to adjust tyre pressure to suit different terrain conditions.

The PARS III 6×6 front and rear axle steering system gives the vehicle the lowest turning radius in its class. The ability to gradually decrease the steer-by-wire angle of the rear axles, coupled with their locking over certain speeds and the ABS system and engine brake, all contribute to enhanced driving safety.

The two-man driver’s section is located at the front of the vehicle, which offers a horizontal field of view of over 180° and a high level of driving safety and comfort. Large glass periscopes, and front driving and manoeuvre cameras with thermal cameras located at the front and rear of the vehicle, provide high-level situational awareness for both driver and commander.

The door covers, personnel seats, rifle holders and interior lighting elements are all designed to ensure maximum crew comfort in the vehicle, which can accommodate up to nine personnel. With a range of over 800km, the PARS III 6×6 has fuel tanks incorporating special measures to protect against explosion and puncture, an under-armour reserve fuel tank being also available for emergency situations.

Thanks to the modular design of the PARS III 6×6 hull – and to that of its armour package – the vehicle protection level, both against ballistic and mine threats, can be tailored to customers’ requests.

The hull form, underbelly structure, base plates and specially-developed mine-resistant seats are designed to protect personnel against high-level mine threats. The PARS III 6×6 outstrips its competitors, by offering ballistic and mine protection levels similar to MRAP vehicles, while maintaining the combat and mobility characteristics of modern ACVs.

The vehicle has an integrated air-conditioning system, which keeps the vehicle’s internal temperature at +25 °C, even in the hottest desert conditions.

The modular connection of vehicle subsystems to the mine-resistant hull ensures ease of maintenance and replacement – particularly for moving parts and the power transmission systems – making the PARS III 6×6 superior to its counterparts. The powerpack architecture, empowering disassembly and re-assembly in under 60 minutes, gives users the ability to replace the engine in the field, providing maximum readiness levels in combat situations.

The PARS IV 6×6 SOV – Highest Protection Level in its Class
The PARS IV 6×6 Special Operations Vehicle (SOV) provides an optimum combination of the survivability of an MRAP vehicle, with the tactical mobility of a wheeled ACV. It is designed to meet the tactical and operational requirements of military and internal security forces with ‘special’ missions.

Its high level of ballistic, mine and IED protection, together with the RPG net, is designed to protect the crew and the power pack against unconventional threats, in which threat timing and intensity cannot be predicted. The development project began in 2019, with all mine, IED and ballistic tests conducted with the user. The vehicle was tested against high-level mine threats, as defined in appropriate survivability standards, as well as IED and ballistic threats from all directions.

The vehicle’s weapon system is designed to engage multiple targets simultaneously from all directions, including high ground. Two remote controlled turrets are located in the front and rear of the vehicle, featuring a universal weapon mount, enabling the mounting of 7.62mm and .50-cal machineguns or 40mm automatic grenade launchers – which can be easily changed, depending on mission requirements. Two-axis stabilization allows firing on the move, and increased elevation enables engagement of targets on high ground – such as rooftops and cliffs – and/or low altitude aerial targets.

The PARS IV 6×6 SOV operates in all weather and all terrain conditions, day and night, including cross-country and urban areas. The high-performance power pack and ride-height-adjustable, independent, hydro-pneumatic suspension system, provide unmatched tactical mobility to overcome difficult terrain and road conditions, as well as offering drive safety and comfort for the crew. Front and rear axle steering provides a turning radius narrower than a 4×4 vehicle – a unique feature that enables rapid manoeuvre in narrow spaces, especially in low-infrastructure urban areas.

The PARS IV 6×6 SOV is highly versatile, reflecting the broad spectrum of potential missions and areas of operation. It has been specifically designed to carry special operations units to their mission objectives, where multiple threats can exist, and to provide fire support to teams in the field. It features new-generation mission equipment, ensuring combat effectiveness, safer route planning, more effective command and control and faster targeting. 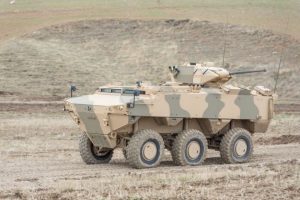 The PARS III 6×6 is available in an entire family of variants to meet varying operational requirements. (FNSS) 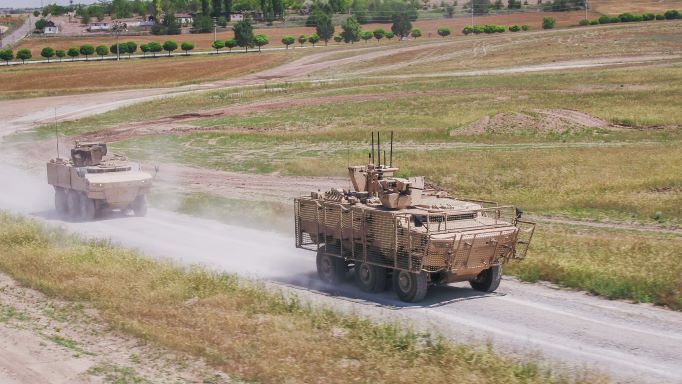 PARS IV further refines the design, based on extensive operational experience, and offers a special operations variant specifically designed for the rigours faced by special forces with both military and law enforcement tasking. (FNSS)