From Aircraft and UAVs to Tanks and Missiles

Pakistan’s armed forces displayed a number of recently-acquired, Chinese-made platforms and weapon systems during a parade held on 23 March in Islamabad to commemorate Pakistan Day.

Among the highlights was a series of fly-pasts featuring J-10CE ‘Dragon’ aircraft, only commissioned into the Pakistan Air Force (PAF) on 11 March. The multirole aircraft, which features an advanced AESA radar and can deploy PL-10 short-range and PL-15 long-range air-to-air missiles, are reportedly being acquired in response to the Indian Air Force’s ongoing acquisition of 36 French-made Dassault Rafale fighters. Also taking part in the fly-past were Sino-Pakistani JF-17 Thunder fighters, F-16s, several older Mirage and F-7PG aircraft, a single Shaanxi ZDK-03 and two Saab 2000 Erieye AEW&C platforms

The Army also showed newly-acquired platforms such as the Norinco VT-4 MBT and SH-15 howitzer – the latter believed to be an export variant of China’s 155mm PCL-181. Also paraded were several air defence systems, including the FM-90, LY-80, and HQ-9B. 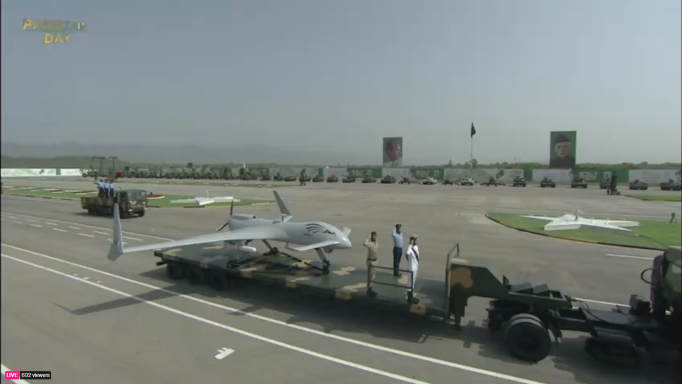