This February, Oshkosh Defense announced it was awarded a delivery order from the US Army Tank-Automotive and Armaments Command (TACOM) to recapitalise a total of 407 Heavy Expanded Mobility Tactical Trucks (HEMTT) and Palletized Load System (PLS) trucks as well as manufacture 601 new PLS trailers (PLS-T). Pat Williams, Vice President and General Manager for Army and Marine Corps Programs at Oshkosh Defense, pointed out: “Vehicle production for the February 7, 2019 FHTV [Family of Heavy Tactical Vehicles] delivery orders will occur from November 2019 to October 2020.”

He offered more details on Oshkosh’s recapitalisation services, which offer significant cost savings to the US Army by returning vehicles to current operational readiness with the same performance, safety and life cycle costs advantages of a new vehicle. “Recapitalised vehicles are stripped to the frame rails, rebuilt to the latest configuration, and put through the same extensive road tests, performance tests, and inspection procedures as new vehicles before they are returned to field operations in like-new condition with a new bumper-to-bumper warranty,” the industry expert offered. “The latest configuration features several upgrades including, an increased horsepower engine, upgraded electronic transmission, upgraded suspension, air conditioned and armour-ready cabs, electrical upgrades, anti-lock braking and corrosion enhancements.”

While the company was unable to speak in-depth about its industry team for this contract, it was noted Oshkosh Defense utilises many different suppliers and subcontractors throughout the recapitalisation process. “Many of them provide a unique capability by tearing down, refurbishing and then reassembling the vehicle components to OEM [original equipment manufacturer] standard,” Mr Williams noted.

All final assembly work for recapitalisation is performed at Oshkosh facilities in Oshkosh, Wisconsin. Asked about the approximate percentage of Oshkosh Defense revenue derived from recapitalisation activities, such as under this contract award, when compared to delivering new vehicles to the defence community, Mr Williams replied: “The recapitalisation of heavy tactical vehicles continues to be a consistent contributor to Oshkosh Defense’s overall revenue performance. We cannot comment on the specific amount.”

Beyond this recapitalisation work, Oshkosh Defense is the manufacturer of the PLS-Ts, with this work being completed in the company’s Oshkosh facilities. Mr Williams and George Mansfield, Vice President and General Manager for Joint Programmes at Oshkosh Defense, were asked to which other Oshkosh Defense activities MONCh readers should be attentive into first quarter 2020. Mr Mansfield initially replied, the Joint Light Tactical Vehicle (JLTV) programme, “is on track to meet the First Unit Equipped milestone, with the Army fielding JLTVs to the 1st Brigade, 3rd Infantry Division at Ft. Stewart, Georgia, which began in January, and the Brigade will be fully equipped by early April of 2019.”

A Full Rate Production decision for the programme is expected later this year. The corporate official emphasised: “The JLTV programme today is on budget, on schedule, and delivering promised capabilities to our warfighters. To date, we have received orders for over 11,000 vehicles, and have delivered over 3,000 vehicles to our customer.”

In yet another effort, Oshkosh has received awards for trucks and trailers as part of the Family of Medium Tactical Vehicles (FMTV) A2 production contract. Mr Williams concluded: “Oshkosh has started building vehicles in support of Production Verification Testing, Live Fire Testing and logistics development.” 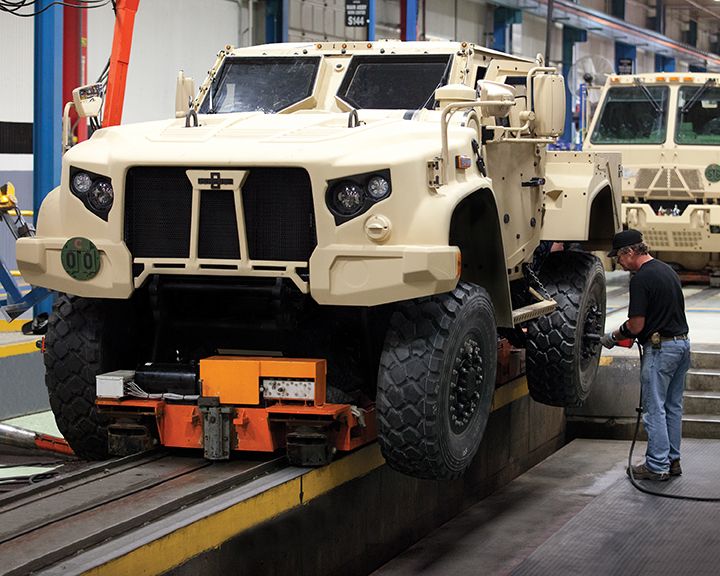