MONCh: It appears a major part of your portfolio is dedicated to anti-jamming-like capabilities for GPS, which are increasingly important to military forces.

J-YC: Correct. Most of what we do allows individuals to operate in a GPS denied, or challenged environment, anti-jamming is part of that. And beyond that, there are also other related threats, such as spoofing, which is wide-spread in some regions, around Russia, China and North Korea, and which is both an electronic warfare and security threat – it is more real and subtle than jamming. Spoofing can be much more dangerous.

MONCh: Are there several Orolia products or systems which are meeting your customers’ requirements that you would like to highlight?

J-YC: We have been a provider of these products for a very long time. More recently, with operators much more concerned about jamming and spoofing and related threats, we focused on Interference, Detection and Mitigation – by engaging in a series of partnerships and acquisitions to strengthen that part of our portfolio. One piece, for instance, is a technology (BROAD-SHIELD) which comes from Talen-X (Dayton, Ohio), a company we are in the process of acquiring. They developed a series of software algorithms that are able to detect GPS jamming and spoofing, as well as equipment that uses that information to combat that jamming, by a factor of a thousand, or slightly more. The second one is the Skydel Solutions (Montreal, Canada) acquisition we’re announcing this week [27 March]. They developed a complete, innovative PNT signal simulation capability, which is about simulating a PNT signal which looks like the real one. With simulation, you are able to generate this signal at will, you can generate threats at will and even characterize how the signal behaves under threats. This is a capability we are growing.

MONCh: What else should MONCh readers and followers be attentive to from Orolia in the next 12-18 months?

J-YC: There are two things. The first is the result of those acquisitions – Talen-X and Skydel Solutions – which will make us much stronger in Interference, Detection and Mitigation technologies. Expect new products with increased capabilities in this area. The second is more on the European side with the Galileo global navigation satellite system (GNSS) [created by the European Union and European Space Agency] and now operational. We are very active on that side of the Atlantic, developing technology that can leverage the new capabilities of the Galileo GNSS. They have a number of unique features that can be leveraged – we are developing robust PNT capabilities using Galileo specifically. I am quite sure the US will be interested in using these capabilities as an augmentation to GPS, which remains in use in allied countries.

MONCh: Thank you for taking time to meet with us and best wishes at this conference. 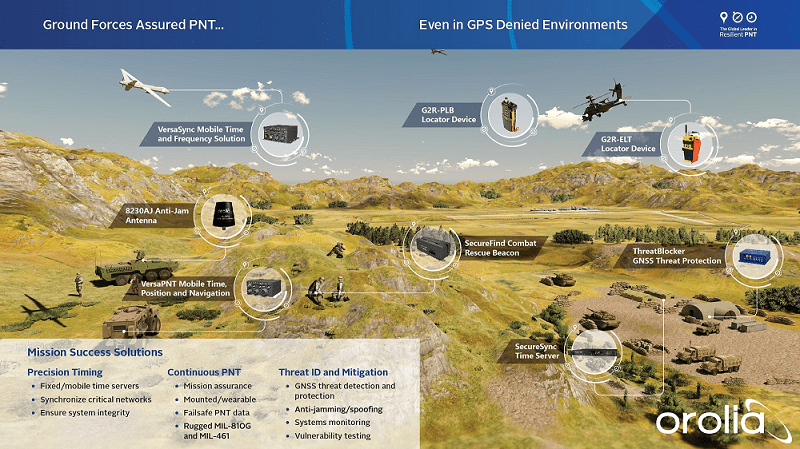