The “Magic” of Orbital ATK

The military acquisition environment in the US and overseas is quickly evolving, challenging Olson and other defence sector leaders to adjust their business plans and strategies. Most significant, regardless of the platform, system or technology, the military customer is increasingly demanding a compressed life cycle “front end,” from conception to fielding.

“Speed to the end user is everything. Maximising existing portfolios as best possible, in an affordable fashion such that overmatch can be recaptured as quickly as possible,” Olson observed. In response to the new realities of the 2017 defence market place, the Armaments Systems division is bringing to bear its Vision 2020 strategy. The wide-ranging internal document is permitting Olson’s division to not only meet demands in its heritage business, by primarily building up war reserves and meeting the need for legacy product, but also to innovate and drive advancements and enhancements to the division’s ammunition suite. On the materiel side of the business ledger, Armament Systems’ cannons are prolific in military services throughout the world. “We have the dominant chain gun, medium caliber solution in the world,” Olson declared.

As this article was published the division had fielded more than 15,000 of these weapons. Numbers aside, Orbital ATK continues to innovate its cannon product line in: Caliber flexibility (using .30mm up to .40mm in the same cannon); ammo handling solutions; platform interchangeability, in some cases; and permitting its cannons to use ammo innovations provided by internal research & development efforts described later.

The Armament Systems’ division expects its precision guidance franchise to be more dominant in this market space in the future. This part of the Orbital ATK portfolio permits the company to adapt its precision guidance kit (PGK) technology to: better control existing small and large calibre inventories from the front; innovate control technologies to permit ammunition and mortars to be steered from the back end of a projectile; and enhance mid-body control technology. “All of which would incorporate our proprietary applications of technology for power generation and braking and clutching alternator technology,” Olson added. “All of these take what might be called ‘lower-end of complexity’ ammunition and turn them into true precision weapons.”

As military services further evolve from capabilities-based to threats-based acquisition models, the Armament Systems division has seen a resurgence in its barriers technology, for instance the M139 VOLCANO (mine dispenser) and the international version (with an anti-vehicle capability which helps to channel enemy combatants to different areas). Olson pointed out: “Inventories of these systems are low around the globe and need to be replenished, and we intend to be moving more and more rapidly there.”

The division also has a heritage of pioneering non-persistent, anti-materiel mine technology and expects to lead in the barrier market space. Olson additionally highlighted his interest in pursuing one new barrier product opportunity. “The US government is looking for a GATOR landmine replacement system, which is a smarter system, a ‘system of systems’ so to speak,” Olson said.

The legacy GATOR mine system was developed in the 1980s to be compatible with two dispenser systems—the US Navy 230kg (500lb) CBU-78/B and the US Air Force 450kg (1,000lb) CBU-89/B. Additionally the mines are used with the land-based Volcano mine system. The industry veteran continued: “The replacement would have ‘high accountability’ in terms of the ability to detect, make smart choices and create complete accountability with whatever field you set. We intend to compete aggressively for that.”

One of the major technology thrusts in the global Unmanned Aerial Systems (UAS) and adjacent manned aircraft space is meeting the demand for smaller, air-delivered guided munitions. That requirement has resonated loud and clear at Orbital ATK. Olson reported that his division has done a lot of internal work and development, “on a very small (6lb [2.7kg]), air delivered, guided munition—known internally as HATCHET. This munition is highly capable, can be specifically targeted, is smart in terms of its ability to guide – it will have a laser and semi-autonomous laser guiding capability – and you can drop multiples of the munition,” he revealed; “and it therefore has UAS applications. They can be carried on fixed-wing and rotary craft as well.”

Orbital ATK is carving out a niche in this weapons class. As of this interview, Olson observed: “There is nobody in that class with us.”

The munition’s warhead is being developed using proprietary technology from Orbital ATK’s Missile Products division. Olson also pointed out you can, “basically get the same lethality out of a 6lb projectile as you can get out of a 500lb bomb,” explaining it’s not the blast, it’s the fragmentation and effect of those fragments. For illustrative purposes, the industry expert likened the embryonic munition’s guiding capability, combined with multiples of this round used, to, “an attacking group of velociraptors.”

Olson’s team is also focused on meeting the international defence sector’s emergent requirement to respond to and defeat UAS. The Orbital ATK executive further revealed: “Our intention is to field both kinetic defeat – a smart fuzed, medium caliber ammunition – it could even potentially be large caliber that is guided so we can steer it toward a target. We have already demonstrated that capability. And then a non-lethal defeat – which would include some type of ‘disrupter’. Both systems, of which, could be married together, used independently or in tandem.”

Co-production and More Armament Systems division’s business share is rapidly evolving away from a US-centric portfolio to one that has an approximate 50/50 share between the US and international markets. Asked about his international customers’ leading requirements, Olson responded: “They are looking for commonality with US systems, indigenous capability of producing their own weapons and munitions. They don’t want to be as dependent in the past on the US government supplying end items. They want to build that capability internally, and we have really tapped into that.”

From its customer base around the globe, the Armament Systems division has booked about U$5 billion in international orders in the last three years. And with the promise, “there will be more to come,” Olson discussed his division’s “secret sauce” for gaining an increasing market share overseas: “It’s willing to work hand-in-hand with them, understand what their needs are, bringing innovation to them, transferring technology where you can, teaching them, training them, equipping them and providing kit technology to them. Where key intellectual property elements need to be preserved, we preserve those and we provide them end items in those.”

The Armament Systems’ co-production efforts are in progress in Europe and the Middle East. “We’re looking at opportunities in the Far East now – we’re pretty much around the globe,” Olson said. One of many Orbital ATK co-production partners is the Turkish Defence Company MKEK. MKEK follows a prescribed contract that Orbital ATK would commit to similarly with other nations. In simple terms, the co-production partner agrees to build a specified number of medium and/or large caliber rounds each year intended for their nation’s defence only.

Orbital ATK protects its business base by only providing a set number of kits –which generally consists of fuze and warheads – according to the contract. This maintains Orbital ATK’s proprietary production capability, its share of the business and ensures the company isn’t loosing sales to other buyers.

In the internal research and development space, Olson’s division has a high priority for developing, maturing and qualifying its “common fuze.” This new product will be an air-bursting fuze, usable in multiple, different calibers. “What this does is create a high degree of efficiency in supply chain, in manufacturing, and cost-effectiveness with a high degree of reliability. That air-bursting ammunition will go on everything from our XM25 counter-defilade weapon all the way up to, and including, our Super 40mm ammunition,” Olson explained. A follow-on Orbital ATK business development effort will further educate and inform the US services of the benefits which may be derived from commonality across multiple platform and multiple munitions, and really capture economies of scale.

Orbital ATK appears to have hit another “sweet spot” with its air-bursting technology thrust. As Mönch readers are aware, military forces are looking for more capable munitions in this space to support the increasing tempo of operations in urban environments. Indeed, one of many vexing challenges for ground forces in this domain is the counter-defilade mission – engaging combatants hiding behind infrastructure and other materiel.

The Armament Systems division is also focused on advancing the state-of-the-art in proximity fuzes. As background, with an air bursting fuze, the targeting system lases a target, tells the fire control how far that system is away, plugs the data into an algorithm that tells it how fast a round will be moving and the barrel’s rifling, and then counts the number of rotations to get to that distance and then explodes. “For a proximity fuze, this is smart and digitized, allowing it to discriminate multiple different kinds of targets and chaff, so it won’t get fooled by wavetops, leaves and anything like that. For proximity, it’s simply something you fire in that area. It starts interrogating, looking for the target, and once it sees it and gets repeat signals, it fires. This is a different kind of application,” Olson explained.

The sector expert additionally told Mönch that the “magic” of the Orbital ATK enhanced proximity fuze under development, “is it will be battery less.” Eliminating batteries from any system complements the military’s efforts to go lighter and more agile in any operating environment. The Armament Systems division is bringing to bear its PGK (spin/de-spin) technology to operate the fuze without a battery. Olson added: “The PGK technology has an alternator in it. We have been able to adapt that alternator to the back of a medium caliber round and it generates power and feeds the proximity. And it not only generates power but excess power so you can put almost any high demand fuze on and it will feed it.”

With the proximity fuze and its power-generation mode on the back, in place, other PGK technologies are then enlisted to guide the munition. By connecting the round with the fire control system on a platform, often with an RF signal, the system can “talk” to the round and give it commands on how to direct it toward the target. Olson continued: “It will then be able to apply a ‘brake’ to that little alternator on the back and it will change the trajectory on the round in an unlimited number of movements and you get a high degree of surface control and commandability and it will guide it toward the target. You get a proximity fuze to detect, but you can also increase the accuracy of it by being able to guide it toward the target. You are further increasing the maximum lethal range. You can reduce the number of rounds you need to fire at a particular target, which reduces the strain on a platform, increases time on target, decreases administrative and cost burdens, and increases survivability while also limiting the odds of collateral damage.”

Existing US service and joint (two or more services) platform users are fueling the demand for an enhanced proximity fuze solution. 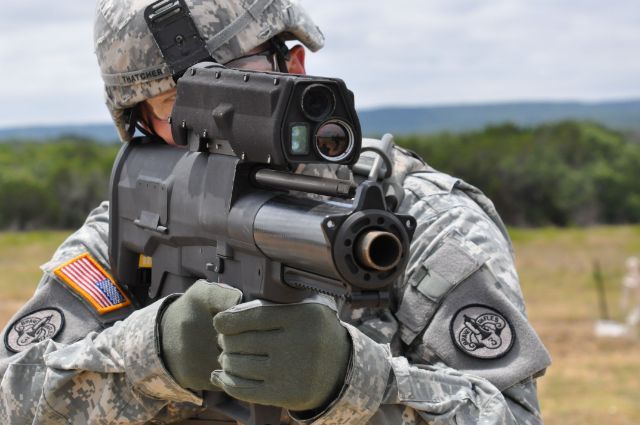