Orbital ATK recently participated in the Maneuver Fires Integrated Experiment (MFIX) at Ft. Sill, OK/USA, which allowed soldiers to use counter-unmanned aerial systems (C-UAS) technologies during a series of demonstrations to provide feedback on how these systems performed and could potentially help fill capability gaps for short range air defence.

Orbital ATK demonstrated its ability to combine both electronic and kinetic attack through its AUDS (anti-unmanned aerial vehicle defence system) which detects, tracks, identifies and defeats drones, and also brings a kinetic element through the integration of the company’s XM914 30mm BUSHMASTER Chain Gun mounted to the STRYKER combat vehicle platform. The gun system also provides the vehicle crew with the firepower needed to defend against ground threats. The combined weapon can work together or independently.

“The ability to insert proven technologies is the key to shortening acquisition time and providing soldiers with the equipment they need today,” Dan Olson, Vice President and General Manager for Orbital ATK’s Armament Systems Division, said. “Exercises and demonstrations such as MFIX provide the Army and industry the ability to understand how we can work together to focus our efforts to quickly deliver next generation technologies.”

The AUDS system is modular, meaning that pieces of it can be tailored for use on different platforms types depending on mission requirements or, it can be installed at a fixed site position to provide C-UAS defence for a facility or operating base.

AUDS is a counter drone system that is designed to disrupt and neutralise unmanned aerial vehicles (UAV), remotely piloted aircraft (RPA) or UAS engaged in hostile airborne surveillance and potentially malicious activity. AUDS combines electronic-scanning radar target detection, electro-optical (EO) tracking/classification and directional RF inhibition capability. The AUDS Team brings together three leading UK companies, each with the unique capabilities required to create an effective CUAS system. The Blighter A400 series air security radars are able to DETECT small UAVs in all weather conditions, 24 hours a day flying in urban areas or near to the horizon. The Chess Dynamics HAWKEYE Deployable System (DS) and EO Video Tracker, featuring both a long range colour camera and a high sensitivity Thermal Imager (TI), along with state-of-the-art video tracking technology, is able to TRACK the UAS and, combined with radar target information, classify the target. The operator is then able to make a timely and informed decision to use the Enterprise Control Systems (ECS) smart RF inhibitor to selectively interfere with the C2 channels on the drone allowing the system to DISRUPT the UAV’s mission, or shot it down via Orbital ATK’s gun.

Orbital ATK also demonstrated how a soldier, armed with its shoulder-fired XM25 airburst weapon system can down a malicious drone. Originally designed to provide soldiers with an ability to defeat targets in defilade positions, the XM25’s fire control system and 25mm airbursting ammunition have proven during MFIX and demonstrations conducted by Orbital ATK, that C-UAS is a natural additional capability the system provides. 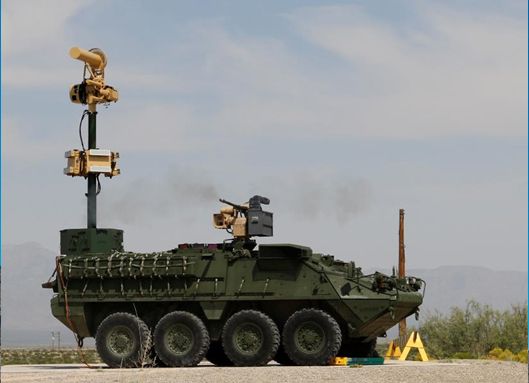