After an approximately 30-day voyage, STALWART will undergo a final fit-out, for which installation and testing of the combat and communications systems, as well as some logistics aspects, will be completed by Australian industry.

The Australian ambassador to Spain, Her Excellency Ms Sophia McIntyre, participated in the farewell to NUSHIP ‘Stalwart’, together with the President of Navantia, Mr Ricardo Domínguez and the Director of the Ferrol shipyard, Mr Eduardo Dobarro.

“Navantia’s role in constructing four classes of ship for Australia has formed an important plank in the development and evolution of our political, economic, military and cultural ties […] Navantia will continue to play a crucial role in providing platform support for these ships in Australia,” commented Ambassador Sophia McIntyre, Australia’s envoy to Spain. Ricardo Dominguez, President of Navantia, singled out the efforts of the shipyard’s workers and highlighted the importance of the next programme on which it is already embarked, building the F-110 frigates for the Spanish Navy.

The contract for the AORs was the fourth between Navantia and the Commonwealth of Australia, following construction of two LHDs and their 12 landing craft, and the design and transfer of technology for three AWD destroyers. The AOR contract also covers sustainment, for which Navantia Australia is developing an advanced asset management model to support them during the first five years. This will also require significant participation by Australian industry, which will be responsible for installation and testing elements of the combat and communications systems, as well as some logistics areas. Delivery is expected to follow completion of this activity on 31 August.

Australia is a strategic client for Navantia. When STALWART becomes operational, the RAN will have 19 Navantia-designed units in service, all of which the company is involved in supporting. 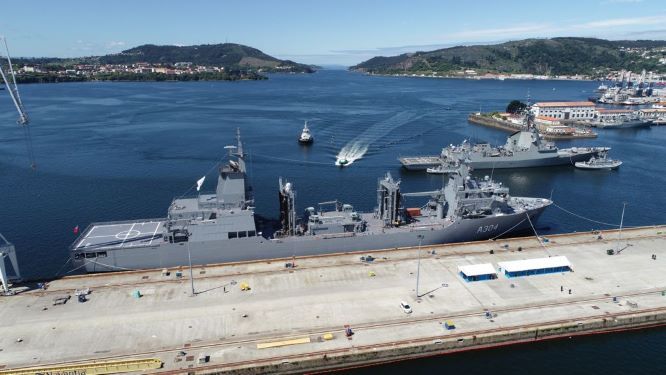 NUSHIP STALWART alongside in Ferrol prior to embarking on its delivery voyage to Western Australia. (Photo: Navantia)