David Portner, Senior Program Manager for Undersea Weapons at Northrop Grumman, pointed out that, since the 1990s, the USN has upgraded its legacy torpedo inventory through software modifications and hardware improvements. “This VLWT is a new design nose-to-tail, initially developed by Pennsylvania State University Applied Research Laboratory. Now, the Navy is looking to take it to industry, and have industry design it for manufacture, and move into production,” he told MON.

Several factors are compelling the USN to move to a next-generation torpedo.

First, the technology bases for the current inventory of MK 46, 48 and 54 torpedoes date back to the 1970s and 1980s. “You reach a point where you need to move to a completely different architecture. This is what this weapon does. It brings in a completely different architecture, both in hardware and software, and moves it more to a hardware-enabled and software-defined architecture. You can take the same vehicle and give it different capabilities simply by changing the software embedded in the vehicle,” Porter noted. Conceptually, VLWT could feature both offensive and defensive capabilities.

Second, the VLWT footprint will ideally permit the weapon’s use from new and different platforms. For instance, the MK48 is 21in diameter, 21ft long, and weighs 4,000pounds. “The VLWT is 9ft in length, but it is 6 ¾in in diameter and is significantly lighter in weight [about 220lbs], which means existing platforms, especially air platforms, can carry more of those torpedoes, or can carry an equivalent number, and have more range and endurance than with the MK54 and -46 alone. It improves the employment of those platforms,” Porter – a former submarine commander – explained.

While integration is not a CRAW programme Phase 1 focus, Northrop Grumman has, nonetheless, “successfully demonstrated its employment on a surrogate – the [MQ-8] FIRE SCOUT unmanned air vehicle, and drops of this weapon from that platform,” – expanding possible VLWT employment opportunities well beyond legacy P-8 and SH-60 fleets. 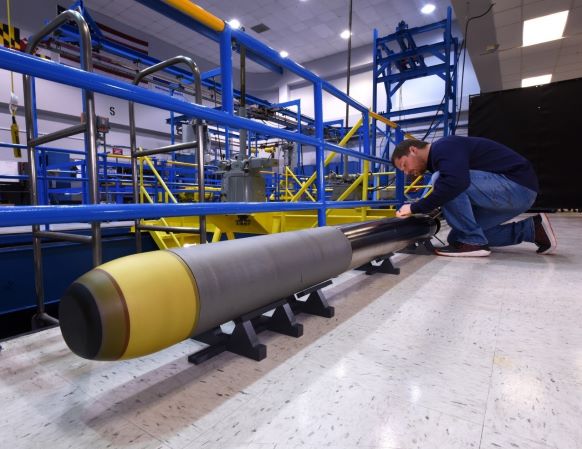 A prototype VLWT awaiting delivery to the USN for the expected start of the Compact Rapid Attack Weapon competition later this year. (Photo: Northrop Grumman)