An “expanded scope of work contract” from the US Air Force Research Laboratory (AFRL), building on an initial award made in December 2019, will help Northrop Grumman to develop the Joint All Domain Command and Control (JADC2) further, via its satcom-enabled FREEDOM RADIO. Meanwhile, a demonstration of open-architecture in-flight connectivity capabilities for US Army helicopters has been hailed by the company as furthering progress of this concept.

“Through this AFRL contract we will be able to mature an open architecture […] solution designed to help create a truly interconnected JADC2 network architecture across air, land, sea and space,” Jenna Paukstis, VP of Communications Solutions, stated. “Our satcom-enabled FREEDOM RADIO will allow [users] to quickly gather and share information from space assets to help them make more informed decisions via an interconnected JADC2 network.”

A proof-of-concept demonstration of the satcom-enabled FREEDOM RADIO is expected to take place before year-end. The company says the demonstration “will be blending third-party vendor technologies into Northrop Grumman’s core open architectures to support the rapid capability investments made by the DoD to support JADC2 efforts.” Other FREEDOM RADIOs are in use on a number of US military platforms. 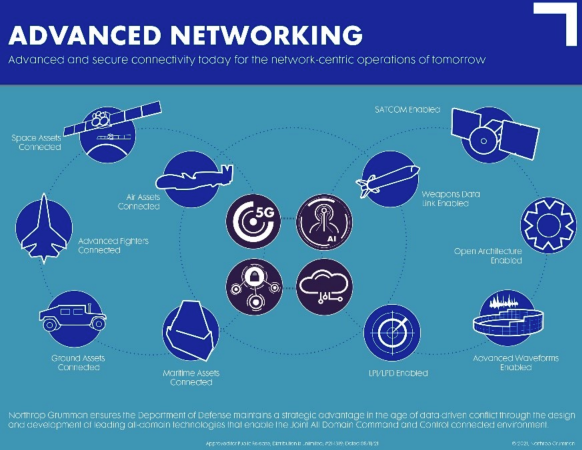