Missiles Destined for US Navy, Luftwaffe

Northrop Grumman has been awarded a $153 million (€135 million) contract from the US Navy to supply an unspecified number of its AGM-88E2 Advanced Anti-Radiation Guided Missiles (AARGM).

The contract covers full-rate production lots 10 and 11, with the customer being the US Navy. It includes weapons that will be bought by the USN and delivered to the German Air Force under the Foreign Military Sales construct.

More than 1,500 AARGM have been produced so far: it is in use on F/A-18C/D HORNETs, F/A-18E/F SUPER HORNETs, EA-18G GROWLERs and TORNADO aircraft operated by the US Navy, US Marine Corps, the Royal Australian Air Force and the Italian Air Force. The weapon, designed to act on surface-to-air threats, is a supersonic upgrade to the legacy AGM-88 HARM system. An extended-range variant – AARGM-ER – is presently under development.

“As threats continue to evolve, AARGM remains an affordable solution to continue protecting the US Navy and our allies with their critical missions every day,” Gordon Turner, Northrop’s VP for advanced weapons, stated. “The ability to detect and defeat the rapid proliferation of today’s surface-to-air-threats, while remaining out of harm’s way, is paramount to mission success.” 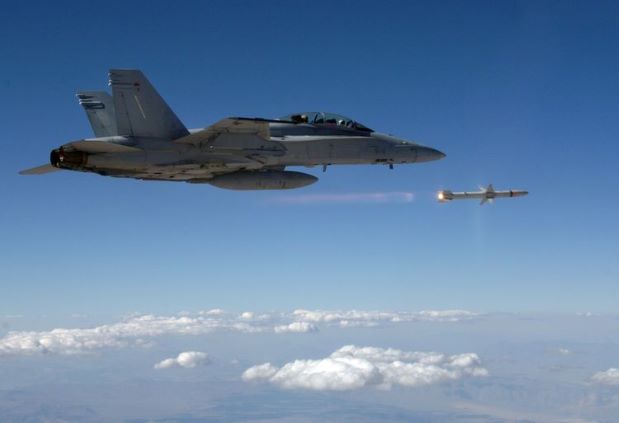 An AARGM is launched from an F/A-18 during testing. (Photo: Northrop Grumman)