Images released by North Korea’s state-owned media on 12 January indicate the “hypersonic missile” Pyongyang test-launched the previous day was the same type it tested on 5 January.

Launched eastwards on 11 January from Jagang Province, the missile flew over 700km at a maximum altitude of 60km and a top speed of Mach 10, before falling into the East Sea (aka Sea of Japan) outside Japan’s EEZ, according to initial estimates by South Korea’s Joint Chiefs of Staff (JCS).

Pyongyang’s Korean Central News Agency (KCNA) stated the following day that, after detaching from the booster, the weapon’s manoeuvrable re-entry vehicle (MaRV) – which KCNA referred to as a “hypersonic glide vehicle” – made a pull-up manoeuvre after having travelled 600km, before making a 240km-long turning manoeuvre and hitting the target “in waters 1,000km away”. No explanation has emerged for differing assessments of the distance travelled by the missile, and it is also difficult to independently confirm whether the MaRV can conduct the type of manoeuvres claimed by KCNA.

During the first test launch six days earlier, the missile is believed to have only reached a top speed of Mach 6 and travelled about 500km, suggesting the test may have been more limited in scope. KCNA noted the latest test launch, which it referred to as the final one for this system, confirmed the “superior manoeuvrability of the hypersonic glide vehicle [verifying the] overall technical specifications”.

Conducted by the Academy of Defence Science, the test was overseen by North Korean leader Kim Jong-un, quoted as urging the academy to “further accelerate efforts to steadily build up the country’s strategic military muscle both in quality and quantity and further modernise the army”.

South Korea’s JCS assessed the latest test marked an improvement compared to the 5 January launch. Hypersonic weapons are intended to operate at speeds of at least Mach 5, and boost-glide vehicles would typically be expected to fly at speeds several times that. However, the defence ministries in both Seoul and Tokyo have so far refrained from formally designating it a ‘hypersonic’ weapon. They said in separate statements they are still analysing details of the launch, together with the United States. The US Indo-Pacific Command described the North Korean test as a “ballistic missile launch“, while assessing that it did not pose an immediate threat to US personnel or territory or to its allies.

The weapon appears to be a new missile type, first shown during the ‘Self-Defence-2021′ exhibition held in October in Pyongyang. The latest KCNA images show the missile, which was again launched from what seemed to be a six-axle transporter-erector-launcher (TEL) vehicle, appears to feature a modified, single-stage, liquid propellant-based booster, and a conical MaRV payload estimated at about 5m long.

Ankit Panda, the Stanton senior fellow in the nuclear policy programme at the US-based Carnegie Endowment for International Peace, told MON this new missile emphasises “cross-range manoeuvring, which can stress ground-based missile defence sensors and allow North Korea to attack defended installations, including military targets, from unexpected and challenging azimuths”. This fits into a broader trend in North Korea’s missile development since 2019, that has generally focused on qualitative improvements to better penetrate missile defences, he added.

According to Markus Schiller, an aerospace engineer at Munich-based ST Analytics, the booster rocket used for the weapon appears to be the same as that deployed with the Hwasong-8, which North Korea has also described as a hypersonic missile. In turn, the Hwasong-8’s booster appears to be based on that used for the Hwasong-12 IRBM. “There are strong indications that this booster rocket is basically a shortened version of the one used for the Hwasong-12 IRBM, with a length of less than 11m. With the same NTO/UDMH [nitrogen tetroxide/ unsymmetrical dimethylhydrazine] propellant combination and engine unit known from the Hwasong-12, the booster would weigh more than 20 tons and offer a maximum burn time of between 90 and 100 seconds.”

According to Schiller, the booster would certainly be capable of carrying a payload of over 1t to a range of 2,000km, or more, on a ballistic trajectory. “This is comparable to the performance of the Chinese DF-21D missile: a two-stage solid-propellant missile that carries a MaRV that looks quite similar to the North Korean one in terms shape and size and is estimated to weigh just over 1 tonne”.

The DF-21D is often referred to by Chinese media as a ‘carrier killer,’ intended to keep US carriers away from the Chinese mainland in an anti-access/area-denial (A2/AD) role. Schiller noted the similarities between these systems could also indicate a similar role for the North Korean weapon.

Meanwhile, Pyongyang’s remark that the latest test marked “the final verification of [the weapon’s] overall technical specifications” indicates the missile may be close to entering service. The latest developments come after the UN Security Council held a closed-door meeting on Pyongyang’s 5 January missile launch. Shortly before the session, the US and five other countries issued a joint statement criticising that Pyongyang’s actions show its “determination to expand its unlawful weapons capabilities […] These actions increase the risk of miscalculation and escalation and pose a significant threat to regional stability…. Each missile launch serves not only to advance the DPRK’s own capabilities, but [also] to expand the suite of weapons available for export to its illicit arms clients and dealers around the world”. 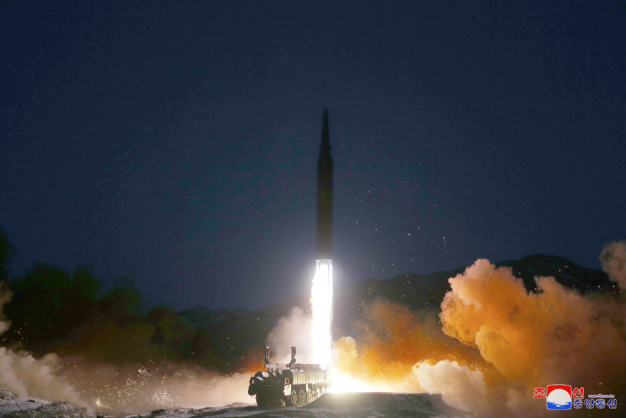 Though details are uncertain, it appears the latest launch may confirm suspicions regarding Pyongyang’s development of a hypersonic capability. (Photo: KCNA)