North Korea test-launched what appears to have been a ballistic missile into the East Sea (also known as Sea of Japan) on 5 January, marking the country’s first such test this year, according to South Korean and Japanese authorities.

The projectile, launched eastwards around 08.07 local time from an undisclosed location in Jagang Province, travelled about 500km before falling into waters outside Japan’s EEZ, noted the MoD in Tokyo, adding that no damage to aircraft or ships in the area has been reported.

Japanese Prime Minister Fumio Kishida criticised Pyongyang’s actions, referring to the “successive launches of missiles by North Korea since last year [as being] extremely regrettable”. Meanwhile, South Korea’s National Security Council convened an emergency meeting, expressing concern that the launch “came at a critical time for both internal and external stability,” and stressing the need to resume dialogue with Pyongyang, both to improve the strained inter-Korean relations and ease regional tensions.

Tokyo and Seoul said in separate statements that they are still analysing the details of the launch, together with the United States. US Indo-Pacific Command described the North Korean test as a “ballistic missile launch,” while assessing that it “does not pose an immediate threat to US personnel or territory or to our allies“. It also said the launch “highlights the destabilising impact of the DPRK’s [Democratic People’s Republic of Korea’s] illicit weapons programme”, adding that US commitment to the defence of the Republic of Korea and Japan remains “ironclad”.

No images of the launch have yet emerged, making it difficult to determine whether this is a new weapon system, but North Korean state-run media often releases photographs and/or video footage of its weapon tests a day after they take place.

The latest launch was Pyongyang’s first since it tested a new type of SLBM on 19 October. The weapon seemed to be a variant of the ground-launched KN-23 short-range ballistic missile (SRBM), the projectiles of which resemble the 9M723/9M723E series of missiles used by the Russian Iskander system.

In less than a year, North Korea has tested a number of new weapon systems, including the KN-23-based SLBM, a long-range cruise missile, a ‘railway-borne’ SRBM system, the Pon’gae 5 surface-to-air missile system, and what Pyongyang described as a “hypersonic” missile.  These and other systems are being developed as part of a five-year military modernisation plan unveiled by the country’s leader, Kim Jong-un, during the 8th Congress of the ruling Workers’ Party of Korea, held in early 2021.

At the time, Kim outlined his country’s plans to “develop defence science and weapon systems” in a bid to modernise the Korean People’s Army, bolster its deterrence capabilities, and enable it to “fight a war at the highest level”. He said that, as part of the ongoing five-year plan, his country was at different stages in the development of new military platforms and systems, including – but not limited to – a nuclear-powered submarine, tactical nuclear weapons, hypersonic glide vehicles, EW equipment, intermediate-range cruise missiles with conventional warheads, and reconnaissance satellites. 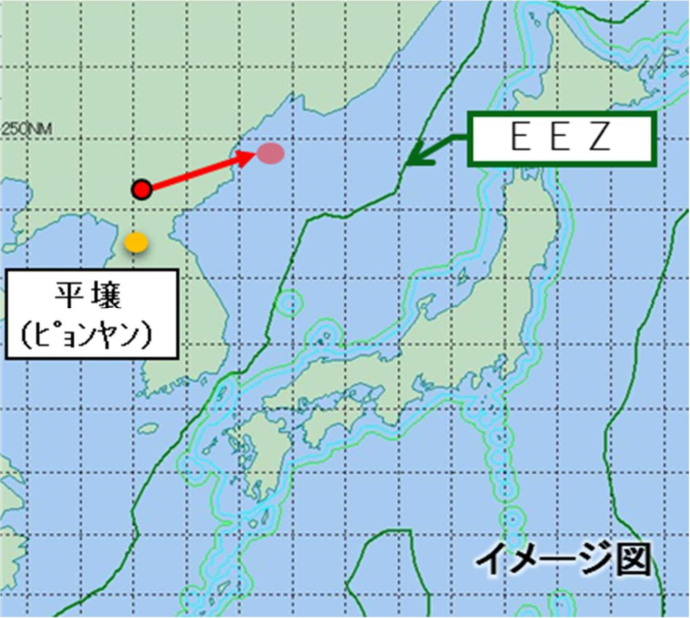 Map showing where the North Koran missile was launched from and where it landed. (Image: Japanese MoD)