North Korea announced on 28 February the test it conducted the previous day was part of efforts to develop its own reconnaissance satellite system.

Korean Central News Agency (KCNA) reported the test helped confirm the “characteristics and working accuracy of high-definition photographing system, data transmission system and attitude control devices by conducting vertical and oblique photographing of a specific area on earth with cameras to be loaded on the reconnaissance satellite.”

The test, conducted by the National Aerospace Development Administration (NADA) and the Academy of Defence Science, was hailed as being “of great significance” in the development of the reconnaissance satellite. KCNA provided no further details on the launch or the rocket used.

A day earlier, South Korea’s Joint Chiefs of Staff assessed that Pyongyang had launched a ballistic missile from the Sunan area in Pyongyang at 07:52 local, and that the weapon flew about 300km at a maximum altitude of 620km, marking the first such test in just under a month and the eighth this year. The projectile fell into waters near North Korea’s eastern coast, outside Japan’s EEZ. There were no reports of damage to ships or aircraft in the area.

Pyongyang released no images of system, but the Yonhap News Agency speculated that it could have been Pukguksong-2 road-mobile, solid-fuel MRBM. While it is possible for North Korea to have tested such a missile under the disguise of a satellite-related test launch, the country did announce in early 2021 its intention to develop a reconnaissance satellite under a five-year military modernisation plan unveiled by the country’s leader, Kim Jong-un.

Kim said at the time that his country was at different stages in the development of new military platforms and systems, including – but not limited to – a nuclear-powered submarine, tactical nuclear weapons, hypersonic glide vehicles, EW equipment, intermediate-range cruise missiles with conventional warheads, and reconnaissance satellites.

Meanwhile, there are concerns that Pyongyang could resume testing of nuclear weapons or long-range ballistic missiles, after announcing earlier this year it would lift its years-long self-imposed moratorium on such tests.

The latest test launch came only a day after KCNA quoted Chinese President Xi Jinping as stressing the significance of co-operation between Beijing and Pyongyang. In a message to Kim, Xi said that Beijing is ready to work together with Pyongyang and to steadily develop Sino-North Korean relations of friendship and cooperation, “under a new situation,” reported the news agency, without providing further details. 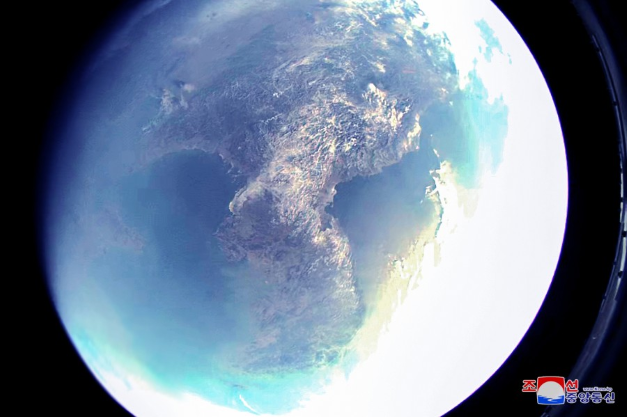 The Korean Peninsula from space during the latest rocket/missile launch. (KCNA)