Noology NA, a Florida-based startup, has begun full commercial development of its Spherical View Radar (SVR), following successful demonstrations of its patent-pending bi-static radar technology, the company announced on 18 August. An initial batch of systems is currently scheduled to ship in January.

A revolutionary counter-drone and UTM surveillance radar capable of detecting, tracking and identifying small, stealthy, autonomous an uncooperative drones with unmatched sensitivity – even in densely cluttered environments, SVR features a true spherical field of view – 360° in both azimuth and elevation – with no ‘cone of silence.’ Small airborne targets with radar cross-section of as little as .001 sqm can be detected and tracked, with target accuracy of 1 m3, from 3-3,000m, 24/7 and in all weather conditions. Low-slow-small (LSS) targets can be detected at altitudes from 1m at speeds ranging from stationary to 500 km/h; the compact, easy to install and safe to operate system will track up to 100 targets simultaneously at target separations down to 0.5m. 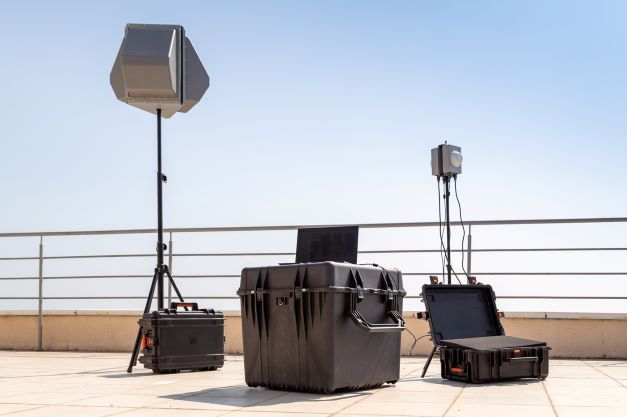 The Transmitter and Receiver for the SVR capability. (Photo: Noology)