Leaning on a legacy that includes the LECLERC’s auto-loaded main armament, Nexter has revealed the ASCALON programme – a concept for a 140mm-calibre main armament system for the future Franco-German MBT fleets.

Designed to combat the heavily armoured threats of the future battlefield, ASCALON is “a breakthrough weapon for breakthrough land combat systems,” the company claimed in a 14 April statement. Faced with numerous, hardened threats, winning the battle at the earliest possible stage will require shooting faster, achieving greater range and ensuring high destructive effect with the first round, while simultaneously ameliorating logistical and ergonomic constraints.

The next generation of large-calibre weapons will therefore have to be able to guarantee tactical superiority, not only for tomorrow (2035), but also for the decades beyond. In order to meet this ambitious objective, Nexter is developing an innovative concept with the potential to evolve and deliver performance that current technologies fail to offer. Leveraging long experience with the LECLERC’s 120mm smoothbore, its mastery of telescoped ammunition and the maturity achieved in its 140mm calibre project, Nexter now proposes ASCALON ((Autoloaded and SCALable Outperforming guN), designed to cope with and remain ahead of threats over the next half-century.

Based on technical solutions to be fully mature by 2025, ASCALON offers an open architecture as the basis for cooperative development under the Franco-German Main Ground Combat System (MGCS) programme. It lays the foundations for the future European tank gun and ammunition standard, drawing on previous experiences with allies, such as in the 140mm Future Tank Main Armament (FTMA) gun programme.

• Compact ammunition: with a maximum length of 130cm, ASCALON telescoped ammunition will be compact and stored/integrated in a self-loading turret similar to that on the LECLERC;

• Increased firepower: the optimised chamber offers an energy level close to 10MJ for kinetic ammunition, while remaining below internal pressure levels of current calibres, enabling evolution to a performance class of 13MJ, capable of addressing all foreseen threats over the next 50 years;

Relying on Nexter’s extensive experience in tank guns and telescoped ammunition, offering an architecture conducive to balanced industrial cooperation, the ASCALON concept displays all the characteristics required to become the standard gun for future heavy battle tanks. Its dedicated ammunition offer users technological and tactical superiority for the coming decades. 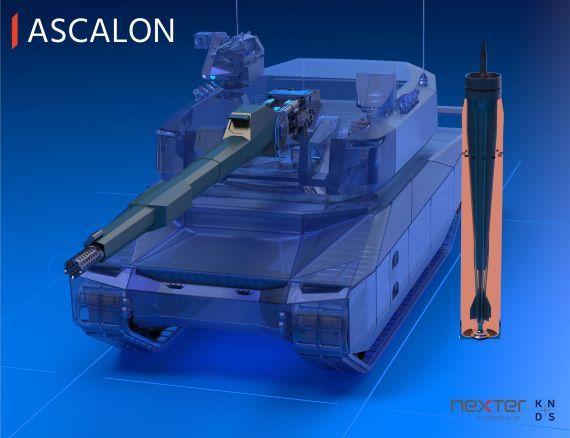