Media reports indicate that China’s J-20 multirole fighter will be equipped with next-generation WS15 turbofan engines, to enhance its performance and manoeuvrability.

The Global Times newspaper quoted broadcaster China Central Television (CCTV) as saying in a 13 March report that the new, locally-developed engine has undergone several tests that led it to being “further improved and optimised”. Developed for 5th-generation fighter aircraft, the new engine has a low bypass ratio and is capable of thrust vector control, said the paper, pointing out that the more powerful WS15 is expected to replace the WS10 as the new standard powerplant for the twin-engined J-20.

Military expert Wang Mingliang was quoted as saying the WS15 should generate a thrust of between 15 to 18 tons. “When the J-20 gets the new engines, it will become a more powerful platform, thanks to boosted super-cruise capability and super-manoeuvrability, in addition to its already excellent stealth capability and situational awareness”.

Quite when the J-20, which has been in service with the PLAAF since at least 2017, will begin being fitted with the new engines remains unclear, but unconfirmed reports suggest some prototypes have already been seen using the new engine. According to Wang, development of the WS15 means that China is becoming increasingly self-reliant when it comes to aircraft engines. China is also working on a twin-seat variant of the J-20. 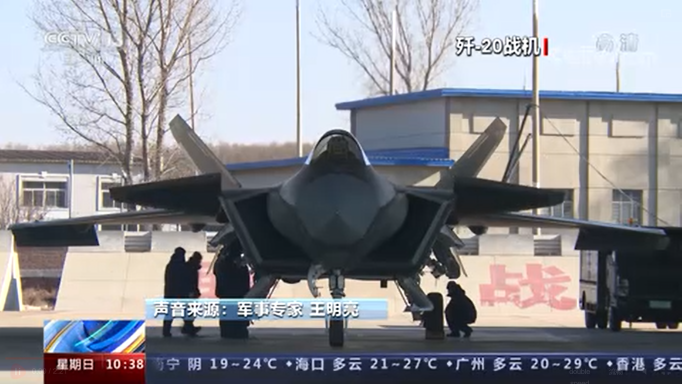 A screengrab from footage broadcast on 13 March showing a J-20 multirole fighter. (CCTV)