Developed and manufactured by Denel Land Systems, the company indicated the T5-52 might soon become part of the South African Army’s arsenal. The acting CEO of Denel Land Systems, Ismail Dockrat, says the weapon system underscores Denel’s global leadership in the design and development of long-range artillery. Able to fire up to seven rounds a minute and effectively destroy targets at ranges of 30-43km, depending on ammunition selection, the T5-52, “…. is a world-leader in its class, offering forces unrivalled accuracy, mobility and ease of operation,” says Dockrat.

The G6-52 self-propelled gun-howitzer is Denel Land Systems’ flagship product, and has been acquired by a number of international clients since its launch in 2003. More than 400 G5 and G6 systems have been sold to clients world-wide. The new T5-52 has the same ballistic system, fire power, range and accuracy as the G5. However, it is more mobile and cheaper to operate and maintain, in line with the global trend towards wheeled artillery systems.

The gun is mounted on a TATRA 8X8 truck, which is able to navigate extremely rough terrain and support forces in the most rugged conditions. The air-conditioned cabin provides the five crew members all-round protection against small arms fire and counter-bombardment fragments.

The gun can be brought into action within 50s and maintain a sustained rate of three rounds per minute. This can be increased to seven round per minute or three rounds every 15 seconds for short periods of intense action. The gun can engage targets with direct fire over an arc of 180° to the rear. This flexibility ensures that it can be deployed in the traditional gun, howitzer, mortar and direct fire roles.

The advanced navigation and fire control systems enable fast deployment and orientation in adverse weather conditions, providing a day/night fighting capability from unsurveyed sites. It is designed to use NATO standard 155mm ammunition, but excels with South African-developed artillery ammunition in terms of range, accuracy and terminal effect.

Mr Dockrat stated that the South African army is currently working with Denel on a few refinements before commissioning the T5 in its own arsenal. The local system – the T5-45 – will have all the outstanding characteristics of the primary weapon, but is fitted with a 45-calibre barrel to fire the South African National Defence Force’s existing range of 155mm ammunition. 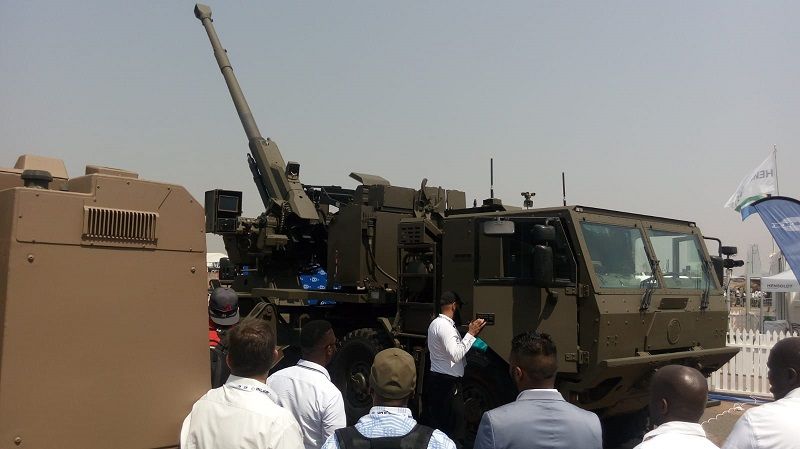