The TLR-6 is designed to maximise visibility and targeting capability in a variety of concealed carry and tactical applications. Streamlight introduced the light in 2015 with a housing designed to fit the trigger guard of Glock 42 and 43 handguns. Today, the company offers multiple models of the light to fit a variety of compact pistols and full-size handguns.

“We continue to expand the versatility of the TLR-6, by introducing this new housing that quickly and securely attaches to SIG SAUER P365 subcompact handguns,” said Streamlight President and CEO Ray Sharrah. “Now, tactical, concealed carry users can attach this light/laser module to their P365 subcompacts and benefit from its targeted bright light, as well as its powerful red aiming laser.”

Like other TLR-6 models, the new TLR-6 for SIG Sauer P365 weapons delivers 100lm and 2,000 candela over a beam distance of 89 metres. Its parabolic reflector produces a balance of beam and peripheral illumination. The light features three lighting modes: LED Only, LED/Laser, and Laser Only, with operating run times of one hour for the LED Only and LED/Laser modes, and 11 hours for the Laser Only mode. All modes automatically shut off after ten minutes to conserve batteries. The light also uses an integrated 640-660nm red laser.
The TLR-6 for SIG Sauer P365 handguns is powered by two 3V CR-1/3N lithium coin batteries. It features an integrated battery door that permits batteries to be replaced while the light remains mounted on the gun, eliminating the need to re-sight the laser after a battery change.

The light is manufactured from durable, impact-resistant engineered polymer. It is IPX4 rated for water-resistant operation, and also is impact-resistant tested to one meter. The new model is 2.5in in length, and weighs 1.12 ounces.

The TLR-VIR II enables users to easily toggle easily between bright light and the IR illuminator/laser. This feature allows military and law enforcement personnel to remain in a proper firing position when making the transition from IR mode to white light, and vice versa. The light features a three-position mode rear selector switch, including IR illumination/IR laser, Safe Off (to prevent accidental turn-on), and visible illumination, that enables users to keep hands away from the muzzle during mode selection.

The TLR-VIR II has an ambidextrous momentary/steady on-off switch. Like other TLR models, the light has a rail clamp that can be easily attached and tightened with one hand, without the use of tools. The IR illumination/laser mode selection also features a tactile indicator on the light housing for switching modes with ease.

The compact light weighs only 3.82oz and measures 3.30in long and 1.40in high. It uses a high temperature, shock-mounted, impact-resistant Borofloat glass lens. Featuring extensively live-fire tested construction, the TLR-VIR II has an IPX7 rated design for waterproof operation to 1m for 30 minutes.

Also at SHOT Show 2019, Streamlight added a new low-profile model to its extensive line of TLR rail-mounted tactical lights, the TLR-8 G, featuring an “Eye Safe” Green Aiming Laser. The exceptionally lightweight and compact light is designed to maximise visibility and long-range targeting capability in a variety of tactical applications.

“Concealed carry, law enforcement, military and home defence users alike can benefit from the TLR-8 G’s targeted bright light, as well as its powerful green laser,” Streamlight’s President and CEO informed MON. “The laser improves users’ ability to focus on targets during daylight hours, when the colour green appears brighter to the human eye than other coloured lasers. The light also can be stored on a handgun so that users can more readily identify a potential threat before taking any action.”

Featuring the latest in power LED technology, the TLR-8 G delivers 500 lumens (lm) and 5,000 candela over a 140m beam distance. The light features three lighting modes, including Laser-Only to keep the gun on target; LED-Only mode to provide bright, focused light; and dual mode, which uses both light sources. Run times are 1.5 hours in LED-Only, LED and Laser, and strobe modes, and 11 hours in Laser-Only mode.

Easily mounted to a wide range of weapons, the TLR-8 G features Streamlight’s one-handed, snap-on-and-tighten interface that keeps hands away from gun muzzles when attaching or detaching them. A key kit is included to securely fit the light to the broadest array of hand guns of any light on the market. 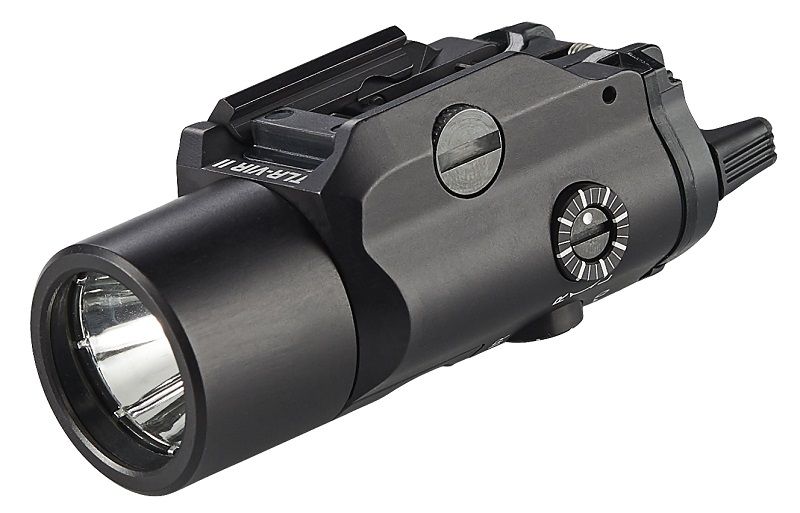