Last of Class to be Delivered in 2024

Navantia launched the fifth and final AVANTE 2200-class Corvette being built for Saudi Arabia under the Al Sarawat project. Named UNAYZAH, the vessel was launched at Navantia’s San Fernando shipyard on 4 December in a ceremony attended by Vice Adm Fahad Bin Abdullah Al-Ghofaily, Commander of Royal Saudi Naval Forces (RSNF), and many other Saudi and Spanish dignitaries.

Construction will continue on the vessel in Spain until August 2023, when the RNSF is scheduled to take delivery, with physical delivery to Saudi Arabia due to take place in February 2024. During his visit, Adm Al-Ghofaily toured Navantia’s Training Centre, where crew and maintenance operators have been training. “So far, all the areas of this important and far-reaching naval programme have been successful, including the necessary operational training, where the Spanish Navy has been particularly involved [in] the instruction of the future crews and the assessment of the modern equipment and complex systems,” commented Adm Antonio Martorell Lacave, Chief of Staff of the Spanish Navy.

“Spain and Saudi Arabia have strong, long-lasting links and nowadays, when international cooperation is paramount, we have to enhance our existing partnerships as the best course to face the present and future […] We are confident that being a leader in the sector and recognized internationally for our quality and technology, Navantia will be the most reliable partner for future upcoming projects,” explained Navantia Chairman, Ricardo Domínguez, adding that the programme “has marked a historic milestone for Navantia and for the development of the cooperation between the shipbuilding industries, defence organizations and Navies of both countries”.

Eng Walid Abukhaled, CEO of Saudi Arabian Military Industries (SAMI), commented on “[…] the countless achievements that this program has contributed to, such as the establishment of SAMI Navantia, the launch of HAZEM – the first 100% Saudi naval Combat Management System, that was developed through the transfer of technology from Navantia, and the launch of the on-the-job training program, which saw the participation of 21 Saudi male and female engineers […] The successful completion of the project represents a quantum leap in SAMI’s endeavors to enhance Saudi Arabia’s capabilities in maritime technology systems and strengthen the defense ecosystem of the country. This underscores our commitment to supporting the Kingdom’s efforts to localize more than 50% of its military spending, in line with Saudi Vision 2030.”

When UNAYZAH is delivered to Saudi Arabia in 2024, the AVANTE 2200 programme will continue, since it includes life cycle support for a five-year period from delivery of the first vessel with an option for a further five years, and a variety of integrated logistic support and other elements. 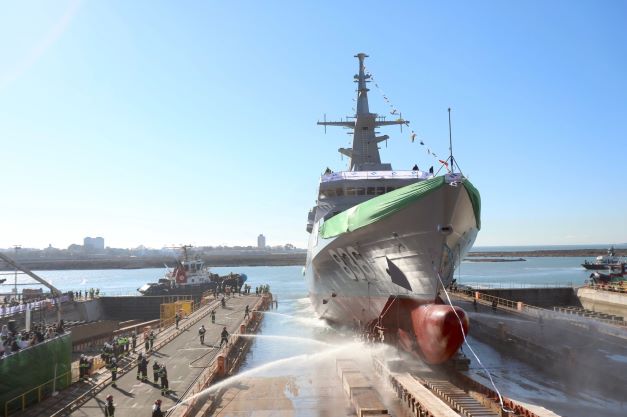 The RSNF UNAZAH was launched on the afternoon of 4 December. (Photo: Navantia)