HMS Al Jubail Handed Over at La Carraca Naval Base

Navantia delivered the first of five Avante 2200 corvettes to the Royal Saudi Naval Forces (RSNF) on 31 March, in a ceremony at the La Carraca Naval Base, in San Fernando, Cádiz.

Participating in the delivery ceremony for HMS Al Jubail were: the Commander of the RSNF, Vice Adm Fahad Bin Abdullah Al-Ghofaily; the Admiral Chief of Staff of the Spanish Navy (AJEMA), Antonio Martorell Lacave; the CEO of Saudi Arabian Military Industries (SAMI), Walid Abukhaled; and the Chairman of Navantia, Ricardo Domínguez, among other notables and officials.

The delivery took place approximately three years after first steel was cut on the vessel and after having successfully passed sea trials conducted over the last several months. A Joint Inspection Commission of RSNF and Navantia personnel conducted the mandated inspection, at the end of which the ship’s ensign was raised and command transferred to her first Commanding Officer. Navantia presented the ship’s bell to Adm Al-Ghofaily as an institutional gift.

Adm Al-Ghofaily stated that the success of the programme underlines the strong and lasting strategic relations between the Kingdoms of Saudi Arabia and Spain, and observed that HMS Al Jubail is the most technologically advanced surface to have joined the RSNF. Mr Abukhaled echoed the Admiral’s comments and further observed “SAMINavantia continues to support our efforts to build a sustainable defence sector in the Kingdom, which includes developing the first Saudi Naval Combat System – HAZEM, facilitating defence localisation through the transfer of technology, and nurturing national talent through on-the-job training.”

“I have no doubt that this ship is going to be an international benchmark in her class and a clear example of a cutting-edge product. I want to highlight our commitment to transfer our most advanced technology to the Kingdom of Saudi Arabia,” declared Chairman Dominguez.

The Avante 2200 programme came into force in November 2018 and, since launch of the first unit in July 2020, Navantia has launched all five vessels on a four-month drumbeat, meaning achieving this milestone in the record time under three years. The vessel’s design has been specifically adapted to RSNF requirements and takes into account the participation and support of the joint venture company, SAMINavantia, and jointly developed products, such as the HAZEM combat system, HERMESYS integrated communications system, DORNA fire control system, the Integrated Platform Control System (IPMS) and the MINERVA integrated bridge, together with other equipment developed by Navantia under licence, such as the MTU engines and RENK gearboxes. 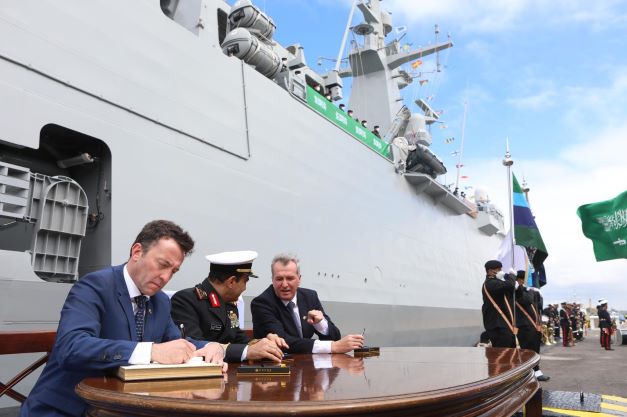 HMS Al Jubail was handed over to her Commanding Officer at San Fernando on 31 March. (Navantia)