Russia and China and Climate Change and Space and Cyber and …

The NATO2030 Agenda, launched during the Alliance leaders’ meeting on 14 June in Brussels, was more than just updating a strategy. It was also intended to respond to an existential question: how can an Alliance born in the 1940s adapt to this new, incredibly complex millennium?

The Agenda, the product of over a year’s reflection, indeed responds to the question – and others. In 79 points, it covers an extensive range of subjects, from China to Russia, through to Covid-19 and climate change to cyber/hybrid warfare and women and defence. Several concrete actions are intermixed with more abstract values and principles.

One of the latter – the newfound transatlantic unity – has crucial relevance, as it came after four years of the ‘Trump Tornado,’ the rift with Turkey, Macron’s ‘death sentence,’ and avalanches of criticism from every direction. To maintain this unity, NATO 2030 suggests, the Alliance should turn to (and enhance) more political and appropriate consultations and coordination. To achieve protection from external threats, moreover, it needs to strengthen deterrence, defence and resilience – the evergreen principles of the Alliance – as well as increasing budgeting from 2023.

In the coming years, NATO also seeks to widen its scope and make new friends. In other words, to ‘go global’ and be able to meet today’s ‘global’ challenges – be they space/cyber/hybrid threats, pandemics, Asia-Pacific quarrels, climate emergencies, or Russia and China.

With the latter nations, NATO2030 uses a (not entirely novel) ‘dual-track’ rhetoric: harsh tones, differently modulated, and more conciliatory. This reflects both diversified sensibilities in the Alliance and the evolving international situation.

Russia is considered the top military threat with which, however, there is room for dialogue and cooperation (especially on arms control), as also clearly emerged at the 16 June meeting in Geneva between Biden and Putin.

China is not yet a threat, but poses ‘systemic challenges’ to international order due to its size, nuclear arsenal, economic expansionism, opaque military modernisation, cooperation with Russia and autocratic attitude. But collaboration is possible on both climate and arms control. As outlined, the NATO2030 approach towards Beijing is probably influenced by Europe’s will to privilege its economic relationship with Beijing – and is less harsh less harsh than Washington would wish.

The technological challenge posed by China, however, worries everybody. China is a champion in AI and disruptive technologies – indeed, NATO2030 launched a new civil-military Defence Innovation Accelerator for the North Atlantic (DIANA), to be developed in collaboration with industry and academia, and a multi-nationally funded NATO Innovation Fund with an opt-in contribution. Oddly enough, both mechanisms recall the tools that the EU has put in place to encourage industry to cooperate more, such as PESCO and the EDF.

In the NATO of today and tomorrow, cyber and space are the new, critical, operational domains. NATO2030 emphasises them, even envisaging possible application of Article 5 in these domains, on a case-by-case basis, and announced the creation of a Space Centre of Excellence in France.

Climate change was also highlighted as a key issue for NATO. Besides reducing greenhouse gas emissions by NATO structures, the document said leaders would assess the feasibility of reaching net-zero emissions by 2050. 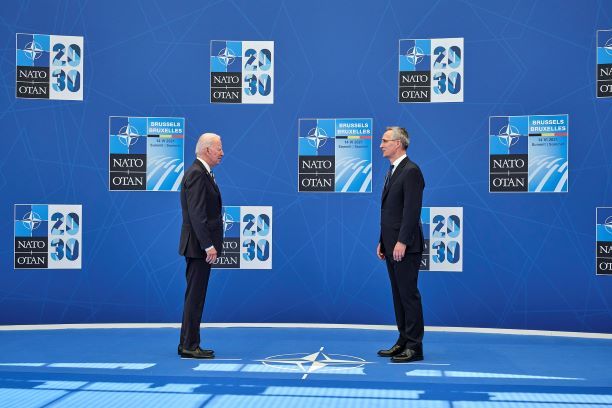