Long-term Adjustments for the “New Normal in Europe”

NATO is about to deploy new battlegroups in Central, Eastern and Southeastern Europe, to counter Russia’s aggressive behaviour, NATO’s Secretary-General Jens Stoltenberg said – in a rather harsh tone – after the first NATO ministerial session.

These “long-term adjustments” to NATO’s posture represent the Alliance’s response to Russian deployment around the Ukrainian border and a more general breach of Western values and security principles by Moscow – something that Stoltenberg called the “new normal in Europe“.

Details on future battlegroups are yet to be decided, but the Sec-Gen revealed that they would likely differ from those deployed in the Baltics and are in no way thought to be a “threat” against Moscow. For now, Romania has given the green light to be a host nation, while France has confirmed its readiness to be a lead country.

According to other sources, Slovakia and Bulgaria seem to be in favour of hosting battlegroups too. At the same time, it is not certain that Hungary will agree, due to the affinity between prime minister Viktor Orban and President Putin.

NATO’s decision to increase its deterrence is not so much motivated by a fear of what might happen in the future – given that the idea of negotiations has been all but abandoned – but rather by an acknowledgment of the present situation.

“We don’t know what will happen,” Stoltenberg said, “but we know what has happened“. What NATO sees on the ground, he added, is Russia continuing to move troops, launching cyberattacks against Kyiv, and, most importantly, not withdrawing its forces.

Sec-Gen was very clear on this last point, contradicting Russian declarations stating the contrary. The current state of Russian troops is known not only to intelligence services, but is also detectable through open-source tools.

Caterina Tani at NATO for MON 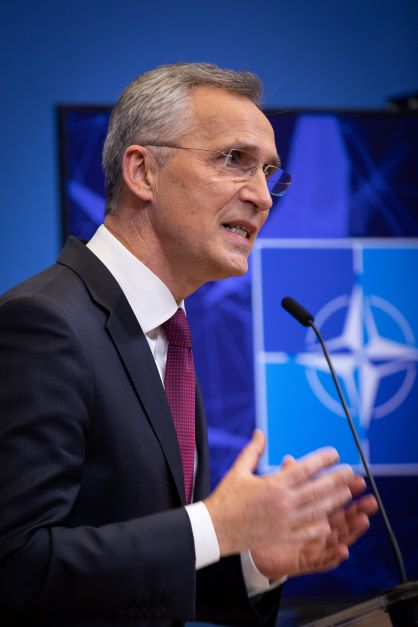 NATO Secretary-General Jens Stoltenberg’s harsh tone may or may not reach all the way to the Kremlin. (NATO)