Alliance Considers Fifth Round of Sanctions

After the revelations from Bucha, NATO expects to see further atrocities and “killings of civilians” from Russia, Secretary-General Jens Stoltenberg said on 5 April in Brussels, ahead of the Alliance’s ministerial. “We haven’t seen everything that has taken place [in the territories controlled by Russians], but when and if they withdraw […] I am afraid that we will see more mass graves, atrocities and more examples of war crimes.” He also said that Russia is likely to restart pushing in eastern and southern Ukraine to take the entire Donbas and create a “land-bridge to occupied Crimea.”

Over the past few days, Russia has slowed down operations in Ukraine, raising hopes of potential peaceful intentions. But then, on 3 April, images of dead bodies of civilians and mass graves found in Bucha – an area liberated by Russians – were disseminated, shocking the international community.

The “right side of history”

Despite global outrage over the “horrific images” of dead civilians in Bucha, and the growing requests for action, NATO rejected the idea of sending troops to Ukrainian territory.

Stoltenberg strongly condemned the murders, labelling the killing of civilians a “war crime“. However, he reiterated that the Alliance can not allow the conflict to become a full-fledged war between nuclear powers. Asked why NATO is sitting back and letting massacres to be perpetrated, he replied the atrocities are Putin’s responsibility and that, by standing up for values and imposing costs on Russia, the Alliance “is on the right side of history.”

In the coming days, allied ministers will discuss stepping-up support to Ukraine – not just Javelins and other anti-tank weapons, which have proved effective on the battlefield and against Russian planes and helicopters, but also other “advanced systems.”

The Alliance will also be supporting investigations, including through the UN and the International Criminal Court, amid Russian allegations that the Bucha massacres were somehow fabricated.

In the meantime, the EU is proposing a fifth round of sanctions against Moscow, which should include a ban on coal imports, blocking the transactions of four major banks, a ban on vessels in EU ports and other goods and financial measures. In addition, Estonia and Latvia are expelling Russian diplomats.

The ministerial will also see discussions on deepening cooperation with the Asia-Pacific. Indeed, NATO’s partners from the area, such as Australia, Japan, New Zealand and the Republic of Korea, will join the meeting.

Elaborating on the issue, the Sec-Gen mentioned the “global implications” of the Ukrainian crisis, particularly China’s unwillingness to condemn Russian aggression. When authoritarian powers are “pushing back on the rules-based international order,” he said, democracies have to “stand together.”

According to Stoltenberg, the Asia Pacific will also be a focus of NATO’s Strategic Concept, which will be published in June and is currently in the drafting phase. The Concept will help NATO adapt to a “new security reality.” 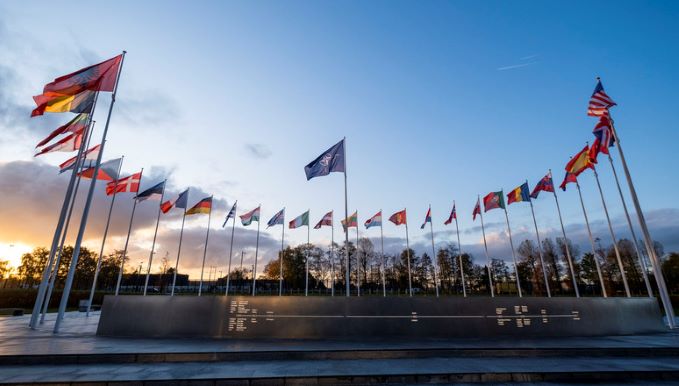