The Double Asteroid Redirection Test (DART), a mission NASA Administrator Bill Nelson says “is turning science fiction into science fact,” blasted off from Vandenberg Space Force Base, CA last week. The mission will reach its culmination in late September 2022, when one of its two spacecraft will collide with an asteroid in the Didymos system. NASA says this is just one of its projects in its evolving planetary defence strategy.

The mission involves two spacecraft. The DART vehicle itself has been built by the Johns Hopkins Applied Physics Laboratory, and will deliberately collide with the asteroid Dimorphos in an attempt to alter its trajectory. The other – the Light Italian Cubesat for Imaging of Asteroids (LICIACUBE), provided by the Italian Space Agency – will observe the collision and transmit data back to Earth. Approximately four years later, another mission – ESA’s HERA – will survey the impact crater and assess any changes to Dimorphos’s mass.

Dimorphos is a moonlet of approximately 160m diameter, orbiting the asteroid Didymos (780m diameter). The Didymos system orbits around the Sun, but it would be very difficult to measure any change to that larger orbit. Instead, the mission hopes to alter the orbit of the smaller asteroid around its neighbour, and to then prove the orbit has changed through subsequent observation. Measurement of the altered orbit will be observable from telescopes on Earth.

NASA has stood up the Planetary Defense Coordination Office – PDCO – which is building a catalogue of near-Earth objects (NEO) and assessing them for their potential to threaten the planet. Its current estimate is in excess of 27,000 such objects, but this is likely to be, at best, only 40% of all asteroids and comets orbiting the Sun which could come close to Earth. The PDCO estimates a collision between an object of a similar size to Dimorphos and Earth might happen only once every 20,000 years, but would cause a crater over a mile wide, killing huge numbers of people. No NEO is as yet known to be on a collision course with the planet, but detection at the earliest possible stage will give time to launch missions to alter the NEO’s trajectory. The PDCO envisions possibly having a small number of DART-like spacecraft in orbit and ready to launch when a threat is detected.

“Our goal is to find any possible impact, years to decades in advance, so it can be deflected with a capability like DART that is possible with the technology we currently have,” said Lindley Johnson, Planetary Defense Officer at NASA. “DART is one aspect of NASA’s work to prepare Earth should we ever be faced with an asteroid hazard. In tandem with this test, we are preparing the Near-Earth Object Surveyor Mission, a space-based infrared telescope scheduled for launch later this decade and designed to expedite our ability to discover and characterize the potentially hazardous asteroids and comets that come within 30 million miles of Earth’s orbit.” 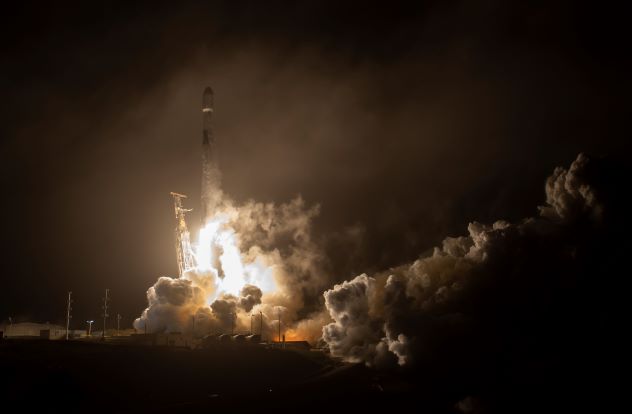 NASA's DART mission was launched on 24 November from Vandenburg Space Force Base, on board a SpaceX FALCON 9 rocket. (Photo: NASA/Bill Ingolls)