Nacelle Improvements for US CV-22s Under Way

The first US Air Force CV-22 OSPREY designated for nacelle improvement modifications arrived at Bell’s Amarillo Assembly Center on 21 September. The aircraft is part of an ongoing process by the Bell Boeing team to further increase the OSPREY’s reliability and maintainability for the US DoD.

Naval Air Systems Command (NAVAIR) awarded Bell Boeing an $81 million (€69.5 million) contract last December for the nacelle improvements, covering completion of non-recurring elements, fabrication of nine kits, and installation of one kit. NAVAIR has an option period to cover fabrication and installation through 2025.

“We worked directly with our DoD partners […] in development of the targeted improvements within the nacelle, to increase readiness rates while driving down sustainment costs,” explained Kurt Fuller, Bell VP and V-22 Program Director. “Bell Boeing engineers developed innovative solutions to support fleet needs and enhance the maintainability of the V-22, using direct customer feedback.”

Approximately 60% of maintenance man-hours are spent on the nacelles. Bell Boeing successfully engineered more than 1,300 new V-22 part numbers to help improve reliability and maintainability of the nacelles, while also reducing repair time. The improvements are predicted to increase aircraft availability and reduce maintenance time.

“Tiltrotors have always brought a new level of capability to aviation,” observed Shane Openshaw, Boeing VP and V-22 Deputy Director. “No other aircraft can accomplish the unparalleled reach, speed, [and] agility of the V-22, and these upgrades help ensure the OSPREY remains a ready and capable aircraft for the DoD for decades to come.”

NAVAIR completed the first flight with nacelle improvements on a Marine Corps MV-22 test aircraft in April. The MV-22 shares the same nacelle structure as the CV-22, and allowed the Bell Boeing team to receive input from NAVAIR and fleet maintainers before the first Air Force aircraft begins modifications. Bell Boeing will perform the CV modifications in Amarillo and Fort Worth, TX; the work is expected to be complete for all CV-22 aircraft by 2025. 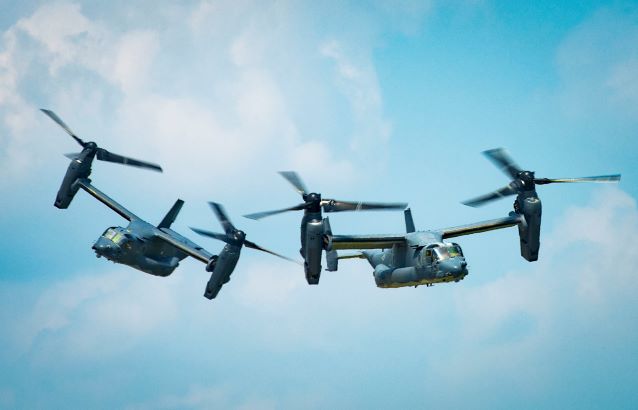 Some 60% of maintenance man-hours focus on the CV-22 engine nacelles. (Photo: Bell Boeing)