Are the Experts Getting it Wrong?

There are dust clouds on the horizon. A newly formed American force composed of Robotic Combat Vehicles – Heavy (RCV-H) are in position, screening a sector on NATO’s eastern flank. The robots are 30t, carry a lethal automatic cannon and are easier to deploy than the legacy M1A2 SEPv3 ABRAMS tanks of a conventional US Army Armored Brigade Combat team (ABCT). The robots quietly scan the terrain with steady thermal and infrared ‘eyes,’ searching for the lead elements of the advancing enemy force. Their tethered Unmanned Aerial Systems (UAS) hover overhead, providing additional situational awareness.

The RCV-Hs are stealthy and specifically designed with a reduced thermal and electronic signature that makes them nearly invisible to the enemy’s sensors. A kilometre to the rear of the RCVs are a group of Optionally Manned Fighting Vehicles (OMFV), next-generation combat vehicles designed to control and integrate robotic combat systems. Inside each OMFV is a bank of computers, each manned by an operator who controls an RCV-H. This human-in-the-loop system enhances the RCV’s state-of-the-art sophisticated artificial intelligence (AI) that enables the vehicle to move across rugged terrain and avoid most obstacles.

Radio traffic inside the OMFVs increases as UAVs report the enemy moving into range. The OMFVs are nestled into protected reverse-slope positions. The controllers are confident. They have practiced this fight in a hundred simulations and each time their RCV-Hs have exacted a heavy toll from the enemy. Guided by other networked UAS flying far forward, the plan calls for long-range precision rocket and artillery fires to hit the advancing enemy.

As the opponent continues to move closer, the RCV-Hs will launch anti-tank guided missiles and then laser-designate the enemy vehicles for further precision strike by attack helicopters and UAS. If any of the attackers make it through this precision-fire hell, the RCVs will open up with direct cannon fire. As the enemy attacks, consistently monitored and targeted along the way, his destruction is all but guaranteed by precision fires. After all, it is a simple matter of mathematics. The controllers stare at their screens, slowly moving their RCV-Hs into position and prepare to give the order to fire.

Suddenly, the interiors of the OMFVs go dark. Artillery fire slams into the ground nearby, like a blow from a gigantic sledgehammer. The roar of the explosions is deafening, even inside the armoured protection of the OMFV. The lights quickly come back on, but to the controller’s shock they soon find themselves with no communications to their RCVs or UAVs. Enemy cyberspace electromagnetic activities (CEMA) have jammed communications. The enemy strike zone is inundated with electronic warfare (EW) jamming and pummelled with rocket and artillery fires.

As the shells fall, ripping off antennas and adding further to the chaos, the controllers look at each other and wonder what to do. The enemy’s outmoded, human-operated, T-90MS main battle tanks (MBT) will soon overrun the RCV-H positions. Robots without controllers don’t fight. With no alternative, the OMFVs retreat, hoping they can outrun the onrushing T-90s. In the next war, it is clear that the side who controls the electrons – and denies them to the enemy – wins.

A dismal scenario, certainly – but one distinct possible scenario illustrating the fury and chaos of future wars. Today, robots are part of the arsenals of every advanced military force. The US Army is developing a family of RCVs and plans to field a force of light, medium, and heavy variants. According to a Congressional Research Service report dated 22 February, “the Army plans to develop, in parallel, three complementary classes of Robotic Combat Vehicles (RCVs) intended to accompany the OMFV into combat, both to protect the OMFV and provide additional fire support. For RCVs to be successfully developed, problems with autonomous ground navigation will need to be resolved and artificial intelligence must evolve to permit the RCVs to function as intended.”

In April 2018, Secretary of the Army, Mark Esper, agreed to accelerate the OMFV timeline to equip initial units in the first quarter of FY26. The integration of humans with robots, known as MUM-T (Manned Unmanned Teaming), has been heralded as the future of war. That may be so, but we might examine recent developments in MUM-T and determine where the experts may be wrong.

Today, the exponential increase in speed of technological change continues to transform the battlespace. The desire to protect soldiers by using robotic weapons is strong and justified. No one can argue that putting a robot in harm’s way is better than risking a human life, but this is not a tame problem – one that can be solved by applying the right equation or algorithm. A wicked problem, on the other hand, cannot be solved by a process.

War is a wicked problem, as the thinking enemy ‘always gets a vote,’ and nothing will ever turn war into a tame process. War is, and always will be, a complex problem, resistant to solutions, for which there is no singular solution but only multiple possibilities, some slightly less bad than others. This is why overwhelming mass is desired to win battles, to cover the unforeseen complexity that always develops. Developing military technology to win a future war, furthermore, is a quintessentially wicked problem.

The duality of military technology – every weapon creates both strengths and weaknesses – is particularly difficult in an era of prototype warfare. If you get it wrong and invest significant time and resources, you can move from strength to catastrophe in rapid order. Technological solutions to combat often defy clarity of vision, since the definition of the problem begins to blur as soon the enemy intervenes.

Consider the French effort to build the Maginot Line of 1940, for example, as the best war-winning technology, produced by the most creative minds available. The Maginot Line was vigorously researched, perfected, funded, built and manned, only to be effectively bypassed and thus neutralised. The French attempted to turn war from a wicked problem into a tame one: and failed. Imagine if that effort had been focused instead on training and equipping the leaders and soldiers of the French Army.

One of the most important skills to solve a wicked problem, such as the use of RCVs in the future battlespace, is to start by asking the right questions. The questions you ask will define the answer. The US Army has asked creative developers and agencies to determine how to control ground robots in the future multi-domain battlespace. Scientists, researchers and think-tanks are feverishly working on this problem. AI that is working for driverless cars is being enhanced to provide RCV cross-country mobility, but the AI challenge of the battlefield is magnitudes more complex than driving on a road and therefore must be enhanced with human control.

The current vision is to control RCVs from a nearby OMFV, with a human operating each RCV or, possibly, as the technology progresses, multiple RCVs. The human-in-the-loop will control or oversee movement and, most importantly, solve the ethical issue of if and when to engage targets with lethal force.

An aerial version of MUM-T has been tested with success in recent combat in Iraq and Syria. AH-64E APACHEs have integrated both the Textron RQ-7 SHADOW and General Atomics MQ-1C GRAY EAGLE in order to be able to transmit and receive real-time streaming video and to control the UAS to engage targets far forward of the helicopter.

MUM-T is a revolution in technology that is now combat-tested for helicopters in a counterinsurgency battlespace, but how will it work for ground RCVs in a peer-on-peer conflict? Right now, the Russians have significant combat experience of controlling URAN-9 RCVs in combat in Syria in 2018 – with ambiguous results. This form of prototype warfare is still in its infancy, however and the Russians are learning as they fight.

The question that has been asked of America’s defence industry is ‘how best to control a ground RCV?’ Controlling puts soldiers in OMFVs as controllers, not fighters. When the RCVs go off-line, are disabled, or destroyed, the combat power of the formation sinks to insignificance, since the formation is built around RCVs controlled by human operators. Controlling the ground RCV is a different situation from controlling a UAS.

Unlike the sky, the ground is multi-dimensional, with many traps and snares to avoid — in short, another wicked problem. To avoid losing the expensive RCV, the controller will move slowly, careful not to roll the vehicle off into a ditch. With a view restricted to the perception of the robot, the controllers will move their RCVs at a snail’s pace. Anyone who has ever played a first-person-shooter video game understands this: if you only had one life and had to give up the game if you ‘died,’ would you move fast or slow? Every controller, therefore, will hang back, trying to protect the RCV and generating a very defensive attitude.

To address this wicked problem, we first must understand the nature of war and then decide whether ground RCVs should be ‘commanded’ by fighters or ‘controlled’ by operators. Imagine if the RCVs (with adequate AI) were added to existing M1A2 SEPv3 ABRAMS tank platoons to thicken the force. The human tank commander takes up the slack in situational awareness, which the AI is unable to cover, by manoeuvring his own tank and commanding his RCV as he would a human-operated wingman tank.

To reduce the possibility of jamming the commands to the RCV, both systems use multiple communications systems, including a point-to-point millimetre-wave link between the two vehicles. To reduce the cognitive load on the human tank commander, the RCV is not controlled but executes a set of simple commands. On command of the human tank commander, the RCV wingman would execute three battle drills: follow in column; move to line and engage targets in the vicinity of the target area designated by a human commander; or move forward to a waypoint, scan the area ahead and engage targets if ordered, firing at the target area designated by the human controlled weapon. In this case, there is no bank of controller-operators in a OMFV, just a tank commander issuing commands to his RCV wingman. The human commander fighting the battle is the most important part of the system.

We have been asking the wrong questions, trying to turn war into a tame process to be fought with robots controlled from afar. You cannot solve wicked problems with a tame, linear mindset. You win wars with fighters, not controllers. There is little doubt that the convergence of AI with robotics and autonomous systems will change the nature of warfare, but the critical issue today is to think clearly about how to integrate them with our most capable system — the human soldier.

If our working definition of AI is the “capability of a computer system to perform tasks that normally require human intelligence such as visual perception, speech recognition, and decision-making,” then the state of AI for ground RCVs may not mature enough by 2026 for them to operate in anything other than a mixed human-robot hybrid force, commanded by humans.

The goal for ground RCV operations should not be for humans to control robots, but for humans to command robots. The issue of command versus control in the employment of ground RCVs is a critical question. The latest MUM-T research should be refocused to have RCVs thicken formations as wingmen for human-operated combat vehicles. Until we can effectively command robots, we should use the ground robots for reconnaissance, special missions, support, and logistics. 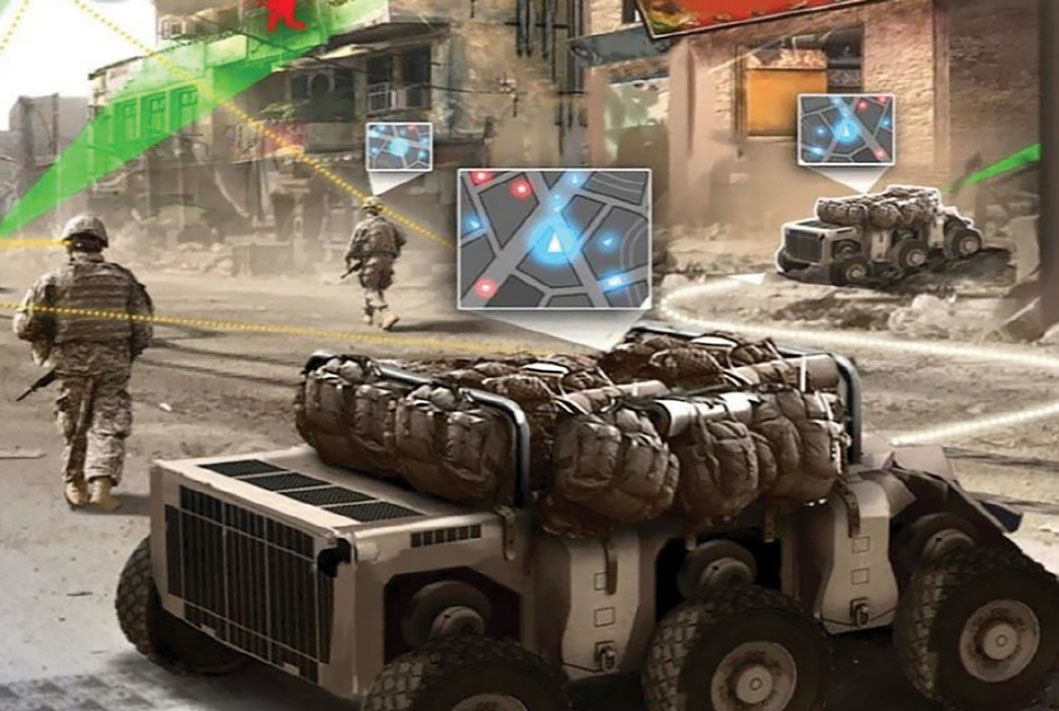