Replacement for T-72 and LEOPARD 2

One of the true surprises at MSPO in Kielce was the suggestion that the South Korean K2 tank might be a viable candidate to replace the Polish Army’s main battle tanks in the future – both the T-72 and LEOPARD 2 fleets. Yet that is precisely what Hyundai Rotem has done, offering the vehicle in a variant designated K2PL WILK (Polish for wolf) in collaboration with Poznán-based firm H. Cegielski.

According to the companies, K2 is the most advanced tank in the world, with a crew of three and a combat weight 55t, a 120 mm smoothbore cannon with autoloader and 40 ready rounds. It has composite armour and can optionally be equipped with a soft-kill/hard-kill active protection system.

If selected, Hyundai would provide technology and tanks would be produced locally. H. Cegielski would serve as a project leader. At MSPO the companies underscored that, “the technology transfer from the Korean partner and the Polish-style construction means an integrated system of logistic support and a secure supply chain of parts, components and ammunition. Undoubtedly, what distinguishes the K2PL WOLF tank in the market is the best mass/power ratio, optimal reactive-passive-active protection, hydro-pneumatic support for obstacle crossing capabilities in [difficult] terrain conditions and advanced fire control.”

Meanhwile another Poznón company, WZM, presented a modified variant of the LEOPARD 2A5 MBT with a remotely-controlled weapon station (ZSMU) and a modern EMES-15 laser target finder with the KLW-1 ASTERIA thermal camera. A ZSMU-1276A3B, provided by ZM Tarnów, replaced the MG-3 7.62 mm machinegun, an upgrade completed in cooperation with PCO from Warsaw. This camera is already being installed on the 2A4s currently modernised to the 2PL standard, as well as on the PT-91s.

It is worth mentioning that according to a late 2015 agreement, WZM is the contractor responsible for the maintenance of the 2A5s and of the electric transmission systems of all LEOPARD tanks in Polish service (2A4, 2A5 and now 2PL). At the same time, WZL is responsible for some small-scale upgrades; elements presented during MSPO 2018 fall under this category. 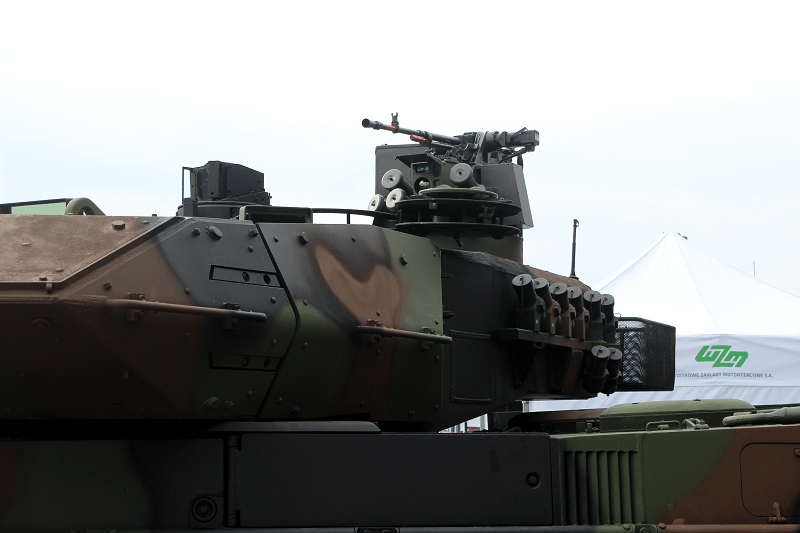