On the first day of MSPO 2021 in Kielce, Poland’s Huta Stalowa Wola (HSW) and Czech-based Tatra unveiled a new 4×4 multirole vehicle, the result of a collaboration sealed at MSPO 2020.

Tatra, which, in the past, has supplied Poland with chassis for the DANA 152 mm wheeled self-propelled artillery system, was on this occasion responsible for chassis and drive (Tatra 815-7 with an Allison 4500SP gearbox), while HSW (project leader) was responsible for cabin and equipment.  Based on the PATRIOT II, the new tactical vehicle sports a larger cabin than its predecessor, with more space for troops and equipment.

The vehicle is now being offered to all branches of the Polish military, particularly the rocket and artillery forces (WRiA), which has been seeking new command vehicles for the WR-40 LANGUSTA (122mm wheeled multiple rocket launcher) and KRYL (155mm wheeled self-propelled howitzer) systems. They are intended as a replacement for aging WD-43 wheeled vehicles, based on the UAZ-469B.

It was intended to serve as a multirole platform for other special variants, including one aimed at the Polish Special Forces. According to the initial plan, codenamed PEGAZ, this branch was expected to get at least 15 vehicles, with an option for an additional 90, but the project was cancelled in July 2020.

The collaborative vehicle is now also offered for export, and can be modified to a 6×6 variant. Its declared speed is 110 km/h, and it boasts a 700km range. 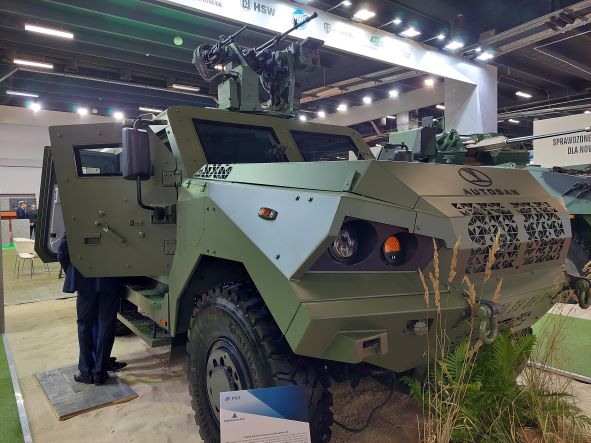