AT MSPO 2021 in Kielce this week, PGZ’s Bumar-Łabędy presented the latest variant of the LEOPARD 2PL tank, known as the M1. Ultimately, all Polish 2A4s are scheduled to be modernised to this standard. Poland operates 247 LEOPARD 2s, acquired from Germany (128 A4s between 2002-2003; 14 A4 + 105 A5s between 2014-2015). The A4s are now being upgraded to the 2PL standard by Polish industry, led by Bumar-Łąbędy, in cooperation with Rheinmetall Landsysteme, which was responsible for developing the modernisation concept.

In comparison to the 2A4, the PL variant has a changed turret shape, resulting from additional armour. Other changes include replacement of the main armament hydraulic stabilisation system with an electric one, and improvements to the L44 smoothbore gun, which will be now able to fire more advanced munitions, including the DM63 and DM78 CSDS-T/DM88. The 2PL variant also features PCO’s KLW-1 ASTERIA thermal vision camera for gunner and commander, the KDN-1 NYKS reverse camera from the same manufacturer. Total weight has increased by 4t to 59.2 tons.

The M1 variant presented this year displays some minor upgrades, such as the introduction of an echo function in the laser rangefinder – enabling the gunner to engage even when a correct distance estimate to the target is impossible to establish – automatic fire suppression system in the APU compartment, introduction of a ‘cold start’ feature (engine start-up without re-starting the electronic subsystems), active cooling of the electronics compartment (EWNA system), as well as preparing a tank for future installation of a Friend-or-Foe system (THERMAL BEACON system). Moreover, the M1 has been enhanced with a PIX function – the PERI R17 commander’s observation and targeting periscope can be automatically moved to a pre-set position, regardless of turret position. 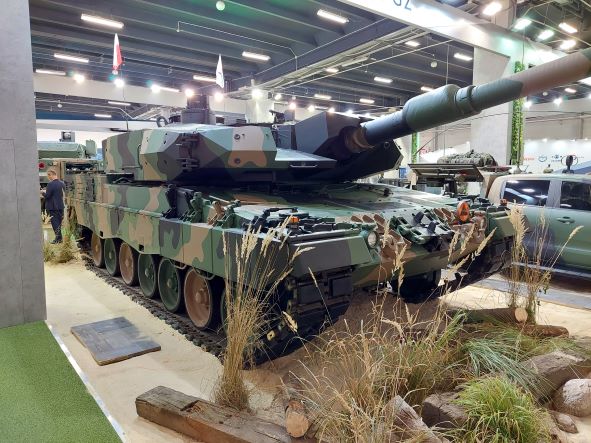 The M1 variant of the LEOPARD 2PL modernization project on display at MSPO 2021. (Photo: Robert Czulda)