PGZ took the opportunity of MSPO 2021 in Kielce, Poland, this week to outline the strategy it is adopting for the Polish Navy’s frigate acquisition programme.

Under a project dubbed MIECZNIK (SWORDFISH), a class of three frigates is to be built, with construction to be carried out in Poland. The project was originally launched in 2013, when an analysis and concept development phase was initiated by the Armament Inspectorate. At the time, the avowed intention was to procure multirole corvettes: the programme was re-launched in Frbuary this year and is now focused on frigate-sized vessels. The acquisition cost is put at some PLN8 billion (€1.8 billion).

The acquisition programme is divided into two elements: PGZ’s MIECZNIK Consortium is simultaneously analysing the best platform and an Integrated Weapon System (ZSW). It was revealed that the company has already been negotiating with various foreign partners, and that construction work will be divided between two local shipyards – Remontowa Shipbuilding and PGZ’s Stocznia Wojenna. Both will be involved in building ships, while the latter will also be responsible for system integration.

Three platforms are under consideration: the MEKO 300PL (thyseenkrupp Marine Systems), the F100PL (Navantia – see MSPO 2021: Navantia Exhibits for the First Time | Moench publishing group (monch.com)) and the AH140PL (Babcock). According to the plan, a winner will be selected in February 2022. The first ship with the ZSW is to be completed by June 2028, a second by August 2033, and the third by August 2034. Launch of the first-of-class is expected in 2025. A slow pace of delivery is currently one of the most vocal criticisms of the programme.

Warsaw seeks to involve local companies and use as many indigenously-designed and -manufactured systems as possible. This will include hull construction (following technology transfer from a foreign supplier), design of the ZSW and integration. The MIECZNIK programme is expected to create some 2,000 additional jobs. 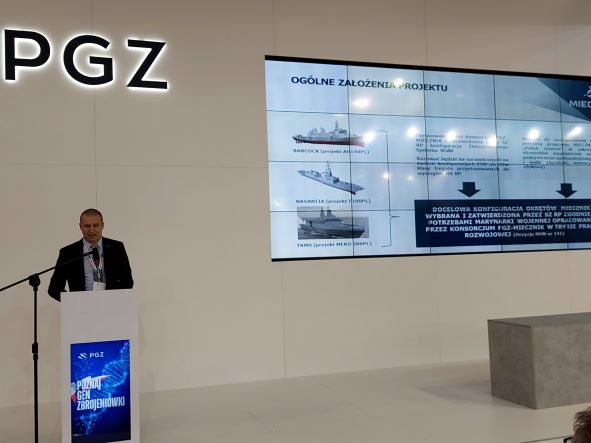