Described locally as “the most important in the Polish history,” the contract is valued at between €6.6-13 billion. In total, the Polish armed forces will receive 23 batteries, with almost 400 launchers for the missiles, that feature a 25-50km range.

The framework contract for development and delivery of short-range air defense systems was signed in the presence of the President of the Republic of Poland (and Chief of the Armed Forces), Andrzej Duda, and the Minister of National Defence, Mariusz Błaszczak. PGZ will be responsible for delivering systems, technology and knowledge acquisition, industrial capacity building, project management and system integration

The NAREW system is expected to be integrated with locally-designed radars, such as PET/PCL (passive location), P-18PL (target detection), SAJNA (fire control), communication and auxiliary systems, as well as vehicles. Regarding interceptors, they are to be procured from a foreign partner, together with several major technologies which Polish defense industry currently lacks.. 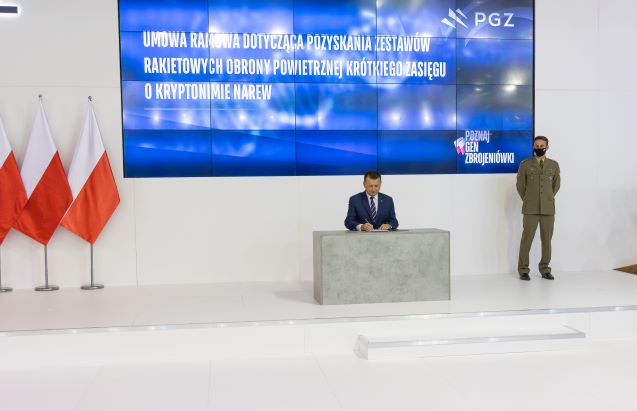