The LPG is a Polish modification of the 2S1 GVOZDIKA mortar, produced by HSW until 1993. RAK has previously been mounted on other chassis, including the HSW-designed OPAL. On the LPG, road wheels have been reduced to six and hull shape slightly modified, with additional skirt armour protecting the upper section of the wheels. Torsion rollers have been replaced by hydropneumatics suspension and supporting rollers added.

There are two types of RAK: tracked (M120G) and wheeled (M120K), the latter already in service in brigades equipped with the ROSOMAK APC. Both feature an automatic loader, allowing a rate of fire up to 8rpm, but HSW seeks to increase that to at least 10. Range is stated at approx. 12,000m and the technical parameters for the two versions are practically identical: a fire control system integrated with a ballistic computer, internal and external communication systems, 360° observation sensors, laser-warning system, 81mm smoke-grenade launchers, laser rangefinder, and GPS/INS system. Its maximum speed is 60km/h – 80km/h for the wheeled variant.

Ultimately, RAK is intended for heavy brigades, equipped with MBTs and AIFVs. The idea to introduce new self-propelled mortars originated in 2005, when Poland started to field the ROSOMAK wheeled APCs. 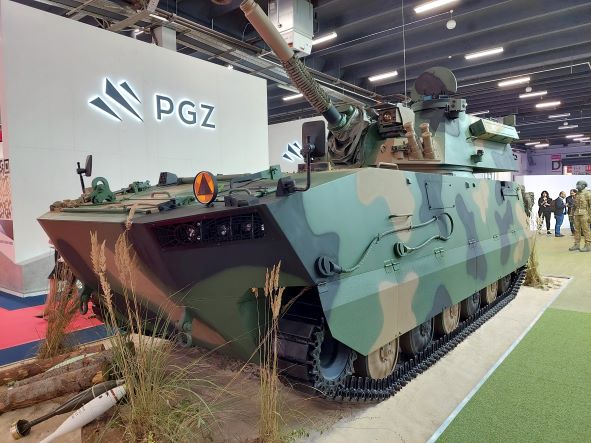