Two Czech companies – Excalibur and Tatra –jointly showed a prototype wheeled self-propelled 155mm howitzer during MSPO 2021 in Kielce, Poland, this week. The DITA, based on Tatra’s 8×8 chassis with the company’s T3C-928-90 eight-cylinder engine, was first shown publicly at IDEX 2021 in Abu Dhabi.

The DITA project was launched in 2019 as a replacement for the DANA vz. 77 howitzer. While the DANA was a 152mm weapon, DITA can use standard NATO 155mm munitions. It can fire in several modes: single fire; rapid fire (also with delayed detonation); programmed fire (at pre-set intervals); and MRSI [Multiple Rounds Simultaneous Impact]. It can fire up to six rounds and has a 60sec reaction time.

The turret is an independent system, and can thus also be mounted on a tracked platform. It includes Automatic Setting of Action Position (ASAP), ammunition management and inertial navigation systems. DITA’s range is 600km, while its achieves up to 90km/h on paved roads. Its total weight is 29t and overall length 13.02 metres.

The manufacturers claim the range is up to 39km – or greater using advanced munitions. Ammunition stowage amounts to 40 rounds, and the platform features a two-man cabin armoured to STANAG 4569 Level 1, with an air-conditioning and a filtration unit. 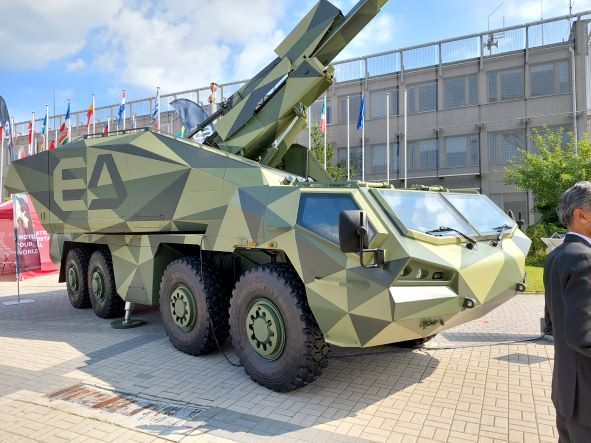