With the ZP5 line, Minox brought some very interesting new rifle scopes to the market, suitable for both sporting and tactical applications. MONCh Gear Box tested the ZP5 5-25×56, which represents the current standard for modern sniper scopes.

The Minox comes with flip-up caps, a cleaning-cloth, a 2mm hex key for zeroing and a battery for the illuminated reticle. It seems to be a high-value and rugged article. Adjusting the dioptric is fast and easy and is secured by a locking ring against accidental adjustment.

We mounted the scope onto a Haenel RS8 precision bolt action rifle in .308 Winchester, with an Era-Tac mount with 20 MOA cant. Mounting itself was pretty easy, as we only put a feeler gauge between the mount-block and the flat bottom of the scope. The screws were tightened with a torque wrench.

The reticle is based in the first focal plane and well thought-out for tactical use, although the lines/hash marks are a bit thin, according to the tester, as they are not visible in lower magnifications. When shooting fast or in non-optimal light conditions, the shooter will have to use the reticle illumination. Illumination selection has 11 settings, with the ‘off’ position between 10 and 0, meaning you do not have to dial back to 0 to switch off. The illumination automatically deactivates after three hours. There are two different mil-based scales in the lower portion of the reticle, which help to calculate the distance to the target: one is for very accurate calculation while the other is for fast estimation.

We zeroed the scope at 100m with Federal Gold Medal Match 168gr HPBT bullets. Dialling and zeroing was very easy and we could fully appreciate system precision. We made 5-shot groups from the prone position using an Atlas bipod and had group sizes of approx. 12mm, which is more than adequate. After zeroing we had a usable range of -0,7 to +19mrad, which should be plenty for most users. As one turn of the turret dials 14mrad (=1,4m at 100m), it is most likely that the second turn is rarely used at all.

We shot a special drill in which different ranges and wind conditions were prevalent, in order to test the precision and repeatability of the weapon system. Precision Dot Targets from Ritter-Druck were used, which are especially built for mil-based scopes. There are 35 dots on the targets, 10cm apart, and a 1cm grid to help calculate group size and deviation. When looking through the scope at a range of 100m, the dots represent the mil-dot reticle. We actually used the MR2 reticle with hash-marks instead of the original dots, but the system is the same.

The shooter dials in a range of 100m without wind correction (most likely height 0 and side 0) and shoots at the centre dot of the bottom row. Various adjustments are then made but the shooter still aims at the same dot. At least two series should be shot to be able to evaluate weapon precision or to avoid operator error.

The hit should be 47cm high and 24cm left of the dot we aimed at (centre dot of the bottom row). Depending on the number of serials conducted, there should be groups at these spots, hopefully with an acceptable dispersion.

As we tested the precision with 5-shot groups, we conducted only two serials, but repeated the drill another time. To make a long story short: every hit was where we wanted it to be. This proves that the click-adjustment is exactly 0,1mrad, or 1cm at 100m, enabling us to say that the scope completely met expectations.

We found the clicks to be both audible and tactile, but the turrets had a little play. We had to re-check from time to time to verify we had really dialled in ‘0,’ as the mark was not necessarily pointing directly at the zero.

The scope had counter-clockwise adjustments, which means that in order to dial higher one has to turn counter-clockwise. In Europe and especially in police and military forces, shooters are used to a clockwise motion. On the other hand, the turrets are clearly marked, which is helpful.

The optical clarity of the scope was self-evident to several individuals who checked it. The picture is crisp, with good colours even in twilight. It seems to be on a par with other well-known manufacturers’ products.

The Minox ZP5 5-25×56 has little to fear from more famous competitors. The adjustments were exact, although there was a little play in the turrets. The scope appears robust and will most likely be able to handle significant abuse. Furthermore, the RS8, with its ergonomical stock and excellent trigger, was a dependable and more than precise companion for the ZP5.

Torben Schmidt is a regular contributor to Mönch’s magazines. 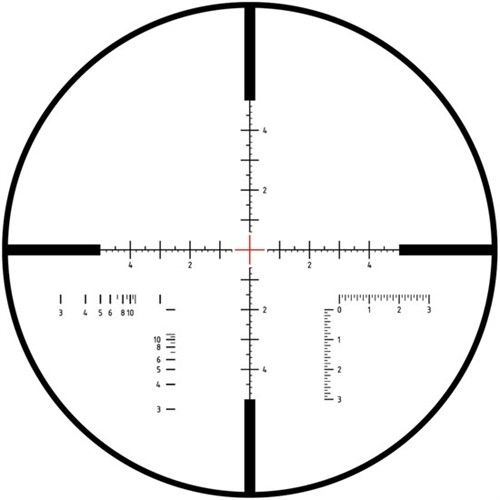