Milrem Robotics has opened an office in Best, near Eindhoven, as the Estonian company paves the way for a European robotics centre. It is the company’s fifth site, following two in its home territory and facilities in Finland and Sweden.

Best was chosen in part because of its proximity to facilities of extant customer, the Royal Dutch Army, but availability of good transport and travel links was just as important. The firm is leading a consortium developing a standardised unmanned ground system under a €30.6 million contract with the European Commission’s EDIDP (European Defence Industrial Development Programme).

“Our office is situated in the middle of the Brainport Eindhoven technology region and is well connected by a large European airport, and by a broad road network to access the rest of Europe,” Julien den Ouden, Managing Director of Milrem’s Netherlands division, stated. “This allows us to efficiently provide training and coaching to officers and NCOs in tactical basic operations with unmanned systems.”

The company took the opportunity afforded by the opening ceremony to unveil an upgraded version of its THEMIS unmanned ground vehicle. The latest iteration features upgraded camera systems and is fully compatible with the company’s MIFIK [Milrem Intelligent Functions Integration Kit] product, which features wired and wireless ‘follow-me’ functionaltiy, waypoint navigation, and obstacle detection and avoidance. 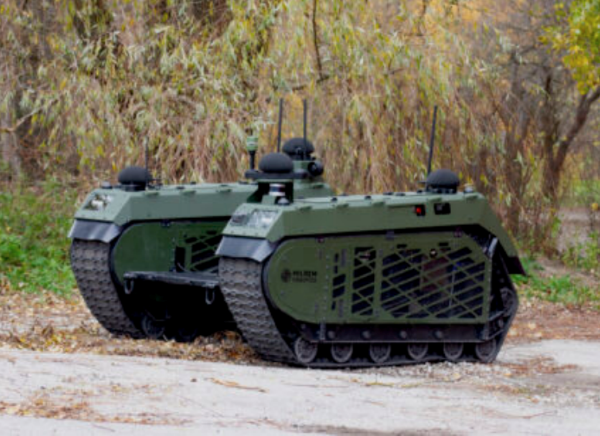 The updated THEMIS vehicle was introduced at the ceremony to mark the opening of Milrem's Netherlands office. (Photo: Milrem Robotics)