The aunav.NEO, developed and manufactured entirely in Spain by aunav, will be shown in Europe for the first time at Milpol 2021 in Paris next week, having made a very impressive first appearance at IDEX in Abu Dhabi earlier this year. The EOD robot will also be shown at FEINDEF in Madrid in November.

The demonstration of aunav.NEO’s capabilities at both forthcoming exhibitions will replicate the aircraft interior environment used with success in Abu Dhabi. This gives ample scope to show the robot’s unique variable geometry system, whereby it can increase or decrease its width at will during a mission, to adapt to such dimensional constraints as a passenger aircraft aisle, for example. Other beneficial aspects of the carefully-engineered device include platform self-stabilisation, allowing it to maintain a horizontal attitude when climbing stairs or traversing uneven terrain, and a ‘plu and play’ facility, which automatically detects and configures any accessory in real time, without the requirement for operator intervention. Its modularity is also worth mentioning, allowing the system to be easily dismantled for ease of transport or configuration modification.

aunav.NEO is a finalist in the Milipol Innovation Awards in the ‘Drone, Anti-Drone and Robotics’ category, the winner of which will be announced on 19 October, and has been recognised as one of the ‘100 best ideas of 2021’ in Spain by El Mundo and Actualidad Económica, which underscores invaluable innovation the device embraces. 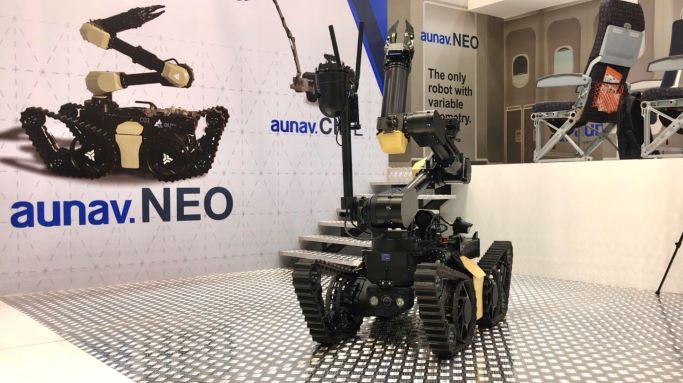 The aunav.NEO, developed and manufactured entirely in Spain. (Photo: aunav)