At Milipol 2021 in Paris on 19 October Airbus revealed a customised variant of the H160 PEGASE helicopter, specifically tailored for the law enforcement role. Ten aircraft are to be procured for the French Gendarmerie Nationale and four for Spain’s Guardia Civil.

The helicopter will feature a Safran EUROFLIR 410 EO day/night gimbal, a searchlight, and an electric winch. In this configuration, the H160 has a maximum range of 475nm (or 4h30 endurance) at a cruise speed of 150kts (maximum speed of 170kts). In terms of payload, it is intended for deployment of a team of 7-8 fully-equipped 12 lightly-equipped troops. The Gendarmerie Nationale hopes to achieve full operational capability with four aircraft in time for providing GIGN and RAID special forces with reliable intervention capabilities for the 2024 Olympics.

MILIPOL also offered Airbus an opportunity to talk about its larger H175 model, recently proposed to the Royal Air Force, which could also appear in a law enforcement version shortly. The focus on these two aircraft highlights Airbus’ aspiration to set a global standard for military, law enforcement, and governmental missions. The H160, for example, promises to be small enough for conducting observation and surveillance missions at reasonable cost, while being large enough to support heliborne operations. 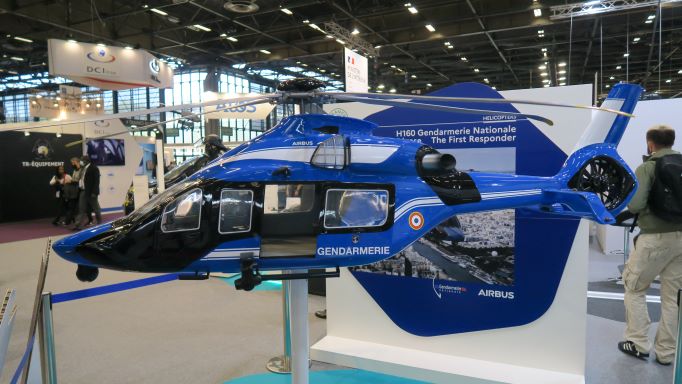 A mock-up of the H160 in Gendarmerie Nationale on the French Ministry of the Interior booth at Milipol 2021. (Photo: Marco Giulio Barone)