Milanion has adopted a strategic position vis-à-vis the Eastern European defence market by inking a distribution MoU with Ukrainian Armor LLC, the company announced on 9 August.

The company showcased its flagship AGEMA unmanned ground vehicle (UGV) at the recent Arms and Security 21 exhibition in Kyiv, where the modular, agile and affordable vehicle generated widespread interest. Ukrainian Armor now has distribution rights for AGEMA, which is designed to support a range of missions in multiple sectors, including defence, civil defence, security, fire and rescue.

The UGV can operate in rough, rugged terrain and is mobile enough for both urban and rural environments. It can be rapidly deployed by fixed-wing aircraft and helicopters, is amphibious and able to support static ground and mobile units.

“Ukraine is an important market for Milanion, and having already successfully worked with Ukrainian Armor, we find they have the capabilities, authority and flexibility to create and service any demand for the vehicle while responding quickly to changing market conditions, enabling us to deliver tailored solutions to local preferences,” commented Milanion CEO, Davinder Dogra.

“We are already a well-known supplier of weapons and military equipment to Ukraine’s defence forces, and have the capability and resources to get units of the AGEMA UGV into active duty. We find the AGEMA is a robust and versatile vehicle equipped with world-class technology, yet simple to operate, low maintenance and affordable,” explained Ukrainian Armor Director General, Vladislav Belbas. 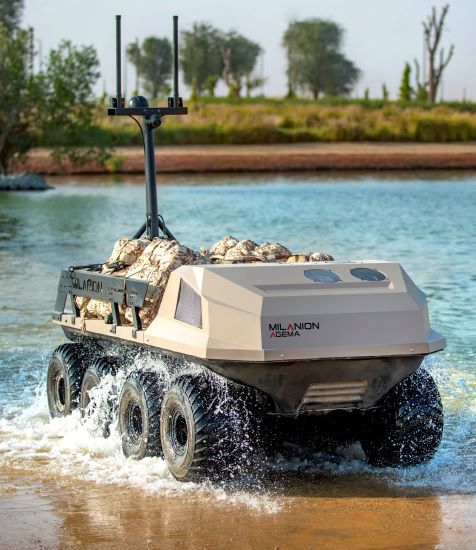 AGEMA has generated considerable interest due to its modular, agile and affordable nature. (Photo: Milanion Group)