This abridged article (for full article, please see MT #9-2018 available at Modern Day Marine 2018 in Quantico, VA/USA, or order here) highlights how the USMC is seeking to equip itself to allow its use of dispersed forces working toward common mission goals to provide the advantage in confounding an opponent, gaining local combat power superiority, and thereby defeating the enemy.

The US Marine Corps (USMC) has a reputation for being frugal, innovative, and providing the most ‘bang for the buck,’ both in combat capability and monetary value of the equipment acquired. The Corps’ focus is on expeditionary operations and the projection of power and influence anywhere on the planet, particularly in close association with the US Navy (USN), of which it is a part. Its core operating unit is the Marine Air-Ground Task Force (MAGTF), a combination of aviation and ground combat and support assets that can be structured in both size and capabilities as needed for various missions, scenarios and threats. After more than a decade committed to primarily counter-insurgency and extended land campaigns, Marine Corps leadership is emphasising a return to its amphibious expeditionary roles and missions. This is evident in the acquisitions it is pursuing and its training and operational tempo.

The Marines active force has three ground divisions and three air wings, plus a reserve division and wing. Marine Divisions are primarily infantry formations, but have supporting artillery, tanks, light armoured vehicles, assault amphibious vehicles, transport, supply, communications and other assets. The Marine Air Wing (MAW) includes both helicopters and fixed-wing aircraft, including the MV-22 OSPREY and the F-35B LIGHTNING. This mix is viewed by Marines as key to their versatility and ability to structure to prosecute any mission and situation. This Marine Air-Ground Task Force (MAGTAF) is a collection of various ground and air assets under a single command, structured as necessary to provide various mission capabilities. MAGTF formations are the Marine Expeditionary Unit (MEU) and Marine Expeditionary Brigade (MEB), which are typically embarked on naval amphibious ships in forward deployed task forces. Being near at hand, these task forces and their embarked Marines can be called upon to respond rapidly to potential crises.

Conducting expeditionary operations and amphibious assaults has been a primary expertise of Marines. Their programmes seek to further the capability to execute such operations. This includes advocacy for naval programmes, of which Sea Basing is a prime example. This includes MSC and Merchant Marine-manned amphibious and support ships configured to provide afloat platforms for the positioning and support of operations ashore. These include the latest AMERICA-class Amphibious Assault Ship built by Northrop Grumman Corporation’s Ingalls Shipyard, which entered service in 2014. It can accommodate over 1,600 Marines and up to 30 aircraft, including the MV-22, F35B, CH-53K and AH-1Z.

A priority of the current Commandant, Gen. Robert Neller, is improving the equipment and capability of the individual Marine rifleman. A number of rapid acquisition efforts have occurred over the last 18 months toward this goal. These have included procurement of the M27 Infantry Automatic Rifle, a magazine-fed lightweight weapon from Heckler & Koch for the infantry squad; the PCIII Ballistic Protection System (BPS) for individuals that is 25% lighter; improvement of the SMAW shoulder-fired weapon with an upgraded targeting system that uses an integrated day/night Thermal Weapon Sight (TWS) and Laser Range Finder (LRF); plus introduction of three new sniper rifles, the M110 5.56mm Semi-automatic Sniper System from Knights Armament, the MK-13 Long Range Sniper Rifle with 1,250m range, and the M38 Squad Designated Marksman Rifle – a modified H&K M27 with a Leupold & Stevens scope that can identify targets and deliver accurate fire to 600 metres.

As part of the latest reorganisation the Commandant indicated his intention to introduce a light vehicle to support the small tactical unit. He mentioned the Polaris MRZR all-terrain vehicle, which the Corps has in small numbers, suggesting that the intent was to acquire more for this wider role.

In addition to the MAGTF CAS assets, the Ground Combat Element (GCE) has organic indirect fire weapons, ranging from the 60mm lightweight company mortar, through battalion 81mm mortars, to the 155mm M777A2 lightweight howitzers and HIMARS multiple rocket launchers (MLRS) of the artillery regiments. Extending the range and accuracy of these systems has been a key objective for the Corps. This is typified by its adoption of the HIMARS truck-mounted MLRS for the general support role. First introduced in 2008, the Corps increased the number of HIMARS from two battalions to six by 2012 and recently decided to add an additional battalion to be operational by 2019. Manufactured by Lockheed Martin, HIMARS has a 40 km range and has demonstrated the potential to be fired from the deck of an amphibious ship.

At the forefront of the Corps’ thinking on its future employment is this emphasis on manoeuvre – gaining and maintaining the initiative; staying ahead of the opponent and his ability to effectively respond. This is applied at both the operational and tactical levels. Many current Corps initiatives are directed towards providing this capability tactically once ashore. Further efforts in conjunction with the USN are continuing to enhance operational independence and increase contingency basing options through Sea Basing. The next challenge facing the Navy-Marine team is perfecting ‘Ship-to-shore Connectors’ to support the other elements of Operational Manoeuvre from the Sea. The USMC is seeking to equip itself to allow its use of dispersed forces working toward common mission goals to provide the advantage in confounding an opponent, gaining local combat power superiority, and thereby defeating the enemy. Implementing this approach to warfare requires both the hardware and a new mindset. USMC success in building this could lead the way, not only for the Corps itself, but potentially for other militaries as well. 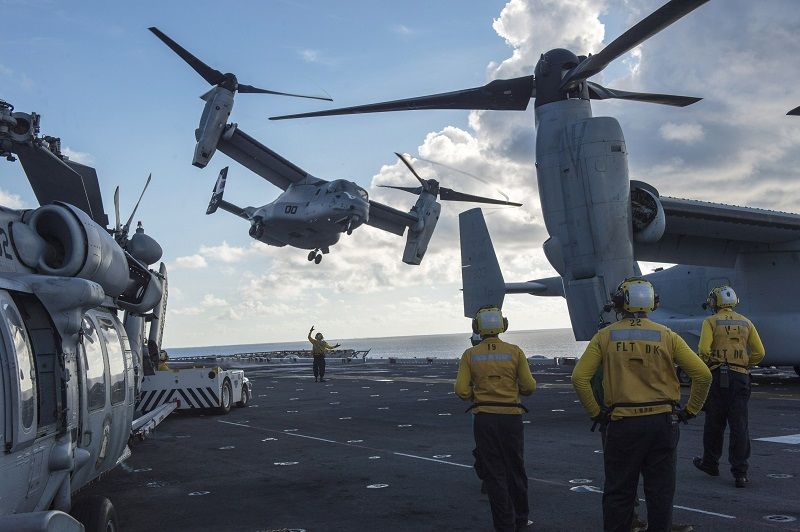