Richmond, California-based Marine Advanced Research, Inc. was present at this year’s Modern Day Marine(MDM) to introduce its WAM-V (Wave-Adaptive Modular-Vessel) family of autonomous surface vessels (ASV) to the Marines and others in the military expeditionary force. Kurt diSessa, a marine technician at the company, familiarised MONCh with one vessel in the firm’s portfolio – one 16ft (4.9m) variant on static display – and built the business case to the question: Why invest in a WAM-V USV?

“What’s really unique about this craft are its flexible hulls (a fabric-covered in polymer), suspension and articulation,” Mr diSessa explained. The vessel was further reported to be wave adaptive, as well as modular in design. With respect to being wave adaptive, the vessel on static display was said to accurately have completed sonar surveys in sea state 3.

Further, the maritime expert pointed out 11 push-pins on the vessel, supporting modularity and permitting two individuals to break-down this craft’s components’ pieces in about five minutes. Citing a use case, the company representative pointed out the vessel on static display had an affixed boom which permitted a sonar head to be raised and lowered, and operated with accompanying support equipment. Mr diSessa continued: “This is a fantastic sensor platform because of stability – you can mount the sensors you want.”

Mr. diSessa pointed out the scalability of the WAM-V vessels permit larger models to effectively operate in higher sea states. For instance, the 100’s WAM-V technology demonstrator Proteus operated in sea state 5, “without a problem.”

WAM-V’s business model in one case, has the company lease vessels to help prospective customers break through the challenge of cost of a ASV. “By leasing it, they don’t have that capital expense, it’s only an operational expense – they pay for it only as long as they need it,” he reasoned.

WAM-V’s customers include universities to support research missions and private sector companies, including Google. The US Army Corps of Engineers is on contract to receive an unspecified number of WAM-Vs.

WAM-V has delivered its vessels to unspecified private and public sector customers in nine nations which could not be divulged.

“The 16ft vessel you see here can be scaled to any size and use. We’re definitely interested in military applications for our technology. We know there is a lot of room to provide value to the Marines and other branches of the military,” he concluded. 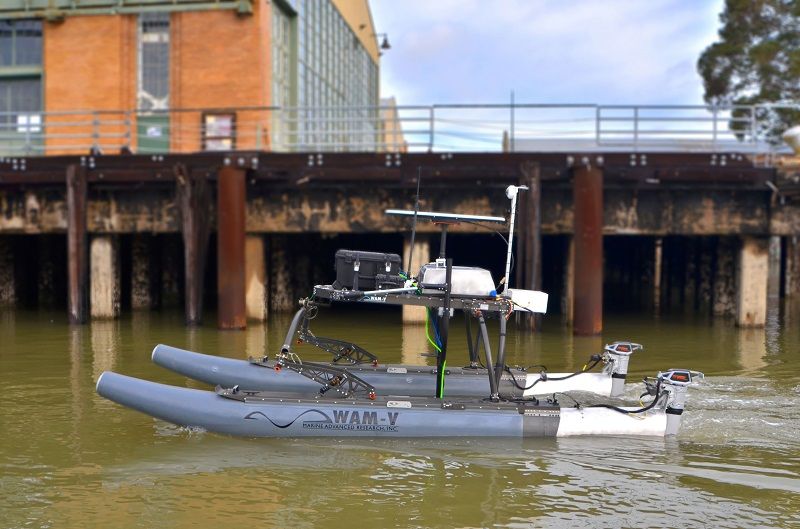