The Lockheed Martin In-Space Upgrade Satellite System (LINUSS) has completed environmental testing and is ready for launch later this year, the company announced on 10 August.

LINUSS consists of a pair of LM 50 12U CubeSats – each about the size of a large toaster – designed to show how small satellites can routinely sustain critical space architectures, regardless of orbit. Developed using internal funding, LINUSS will be two of the most capable CubeSats in geosynchronous Earth orbit (GEO) when launched.

“Space is a dynamic domain and our customers are demanding the ability to rapidly upgrade spacecraft on orbit – to provide greater capabilities and more mission flexibility,” said Chris Crawford, VP of Advanced Program Development for Lockheed Martin Military Space. “LINUSS will be the first step [in] flight-qualifying this technology. The ultimate near-term goal is supporting upgradeable LM 2100 satellite bus platforms, starting with GPS IIIF Space Vehicle 13.”

“Given we are well-known for our systems integration work on large satellite systems, some people are surprised to learn Lockheed Martin has launched over 150 small satellites since 1997,” observed Dr David J Barnhart, LINUSS Program Director. “LINUSS has higher bus density, payload accommodation, and on-orbit processing than any other CubeSat, enabling revolutionary mission capabilities in the future. Early customer community feedback has called LINUSS ‘the most capable CubeSat pair off the planet.’”

Members of Lockheed Martin’s LM 50 family of smallsats, both LINUSS spacecraft are the collaborative integration of the company’s mission EO payload deck with a next-generation 12U bus from Tyvak Nano-Satellite Systems. 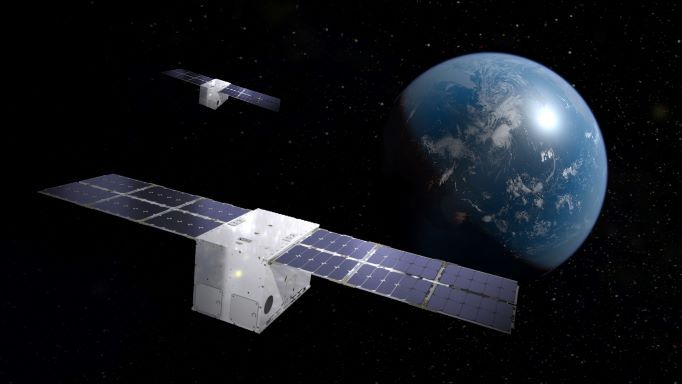