Four Guns to be Supplied Initially

Leonardo is to supply four OTO 126/64 LW VULCANO naval guns to Lockheed Martin Canada for the Canadian Surface Combatant (CSC) programme – three for the first three vessels and a fourth for training purposes.

The lightweight version of the VULCANO, selected by six navies in the last decade, features a highly flexible architecture, allowing for installation on a wide range of platforms. Entirely digital, it is also the only naval gun system seamlessly integrated with the 127mm VULCANO ammunition family, both in guided long range (GLR) and ballistic extended range (BER) variants. The Leonardo 4AP fuze for conventional rounds also contributes to high operational flexibility as a result of its mission-specific programmable nature. The system can operate entirely without crew, the AAHS automated loading system able to manage long-range precision strike and conventional munitions simultaneously.

Leonardo has a half-century legacy of Canadian operations and operates today in Ontario and Nova Scotia with over 400 Canadian employees, providing advanced naval communications, surveillance and power conversion solutions. Leonardo DRS in Ottawa will contribute to the production of select components under the CSC contract and the company also plans close cooperation with small and medium-sized Canadian companies and academic institutions, creating added value by implementing the sustainability principles that lie at the heart of Leonardo’s ambitions. 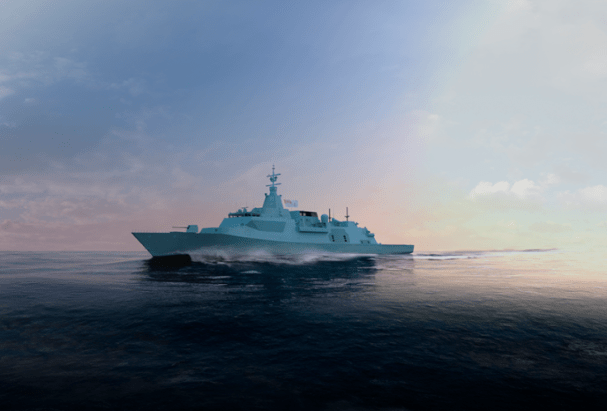 A rendering of the Canadian Surface Combatant. (Image: BAE Systems)